Proud to Have Been a New York City Transit Cop by John R. Martin 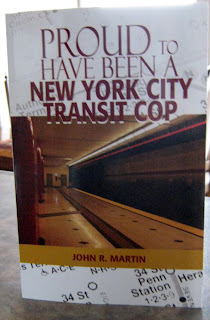 
"This is a true story about a World War II veteran who becomes a cop, a New York City Transit Cop.  Over thirty-five years, from his early days as a Court Officer through to his days as commanding officer of some high profile districts in the Transit Police Department, the stories and adventures of this innovative leader will intrigue you.  Proud to Have Been a New York City Transit Cop is a biographical work describing the journey of Captain John Martin through his thirty-three years of service as a police officer in the City of New York.  It's a story about a native New Yorker who joined the New York City Transit Police Department after service in the United States Navy during World War II.  It's a story about how he and his partner helped to make the Transit Police Force one of the finest, and one of the biggest, in the country.  It's a story about how these two guys charmed the Mayor of the City of New York, upset at least two City Police Commissioners, and forced the City of New York to provide improved police protection for the riding and general public.  And finally, it's a study in human relations and what it takes to provide effective leadership."

My Thoughts:
John R. Martin was a remarkable man, having served in the Navy, as an officer of the court and then as a New York City transit cop. This would prove to be his life's work and a job that he truly loved and devoted great effort and time to. He repeatedly found himself going before the commissioner, the mayor and even a governor as he fought for parity between the transit police and the New York city police. He achieved it too.


Proud to Have Been A New York City Transit Cop relates the trials and triumphs, the crimes, and the ingenuity exercised by the Transit Police in battling the growing crime rate in the subways of New York. John Martin played a vital role in this battle, oft times thinking outside the box to accomplish the goal. Though he was highly favoured among his own men, he often found himself squared up against those in the police commission, including the chief, as he rallied for the rights of those men he worked with.

As you read this book you can feel of his love for his fellow man. Despite the differences in ideals, he didn't berate nor diminish those in the commission he came into conflict with in his book. He recognized their authority but knew also that he had to fight for the rights of those whom he worked with and for the citizens of the city of New York, for their right to safe passage on the subways and transits of the city.

I enjoyed this book as an eye opener into the workings of the TA. It was at times tedious and occasionally repetitive. Overall, it pays great tribute to an incredible leader of a man.

The concluding chapter is written by his son, Brian R. Martin. This memoir (biography/autobiography) was compiled and published after the death of John R. Martin.