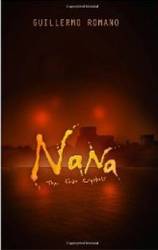 
(from the back cover) Serge is a self-made man with an intense curiosity and thriving ambition.  Desperate for his own sense of meaning, he finds himself in a time of economic downturn, and overwhelming daily challenges.  Burdened with the struggles of life, he finds himself trapped behind his own questions, understanding that life changes in an instant.

To him the answers may lie on an enigmatic woman he unexpectedly meets in the deep jungles of Belize.  This woman, her ancient pendant, and most importantly, her wisdom, will lead Serge on a string of self righteous series of events that could determine his future and the future of the ones around him.


My Thoughts:  The cover art is superb and the plot is reminiscent of Indiana Jones, but with a hunt for something of greater worth than physical value.  However, it is a bit slow to get going which caused some frustration because I could sense the story in those pages just waiting to explode but lacking the ignition.
Though I wanted to identify with the characters, I didn't and found the story was explained more than told,  if that makes sense.  I wanted to find the rhythm of it, to develop a kinship with Serge, to feel the pain and uncertainty he did.  I did momentarily but it didn't last.  But the overall story is interesting and, at moments, exciting. Romano has a great story to tell and the help of a good editor would definitely assist Nana: the Four Crystals to find its momentum and showcase its strengths.  I have no doubt the story is strong and this would help it reach its potential.
One of my favorite scenes in the novel is that of Serge's job interview.  Many a person would have walked away from it all, having endured intense scrutiny, judgment, bribes and temptations, but not Serge.  This shows a strength of character with high morals and scruples.  Serge also proves himself to be a genuine gentleman in the face of temptation.  Satisfied with the results, the "big guy" offers Serge a job that he has a mind to refuse but doesn't and it makes all the difference in the direction his life takes.
Nana:  the Four Crystals is a story of love, hope, adventure and mysteries in the jungles of Belize.  It was an enjoyable journey, once on the road it began.
Rated 3/5
Posted by Shirley at 7:19 AM