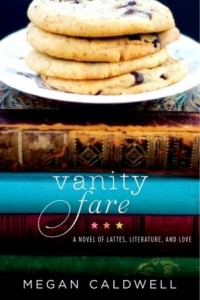 Source:  a complimentary copy was provided by the publisher and TLC book tours in exchange for an honest and unbiased review.

"Her husband left her for a younger, blonder woman; her six-year-old son is questioning her authority, and now so is she.  In order to pay her Brooklyn rent and keep her son supplied with Pokemon and Legos, not to mention food and clothing, she has to get a job -- fast.

So when an old friend offers Molly a freelance position copywriting for a new bakery, finding romance is just about the last thing on her mind.  But the sexy British pastry chef who's heading up the bakery has other thoughts.  And then so does Molly, when she meets the chef's intimidating business partner -- who also happens to have a secret that might prevent Molly from getting her own happily ever after." (from the cover)

I devoured Vanity Fare, relishing and savouring the ingredients therein.   It was simply that delicious mix of snarky protagonist, attractive men and humour that made this novel so much fun to read!  Add some decadent recipes at the end (courtesy of Emily Isaac of Trois Pommes Patisserie) and you have a complete package for an afternoon of you time!


Megan Caldwell fleshes out the characters of Vanity Fare with personality -- brooding and yet warm underneath, or sexy and arrogant (don't the two always go hand in hand?), or snivelling and adulterous in another.  These are the men in Molly's life.  I mustn't forget one most important young man, though; Molly's son is as adorable in his tantrums as in his obvious devotion and trust.  He's a sweet little man whom Molly considers the only thing worthwhile that resulted from her marriage.

Faced with the uncertainty of a single mom raising a six year old with no income, Molly must do things she would never do in a million years like taking on a copywriting job for an ad agency representing a new destination bakery in her city, New York; facing her ex; scrapbooking; to name a few.  With the support of two very good friends (we all need friends like these two), her therapist and her mother; Molly finds the strength to face the challenges life has dealt her.  What she wasn't counting on is the sexy and very attentive baker; nor his business counterpart, the serious and very handsome brooding man with whom she must work closely in preparation for the grand opening and for whom she tries to fight an overwhelming attraction.  (Whatever is a girl to do?)

Vanity Fare, however, is not just a piece of fluff women's fiction nor a romance.  It has substance in plot development, with well-rounded and imperfect characters, and the struggles Molly faces and must overcome are tangible and relatable.  All the necessary ingredients and excellent writing, make this novel a satisfying and palatable read.

In addition to the novel, Megan Caldwell prefaces each chapter with a sample of the copywriting Molly prepared for several items the new bakery, Vanity Fare, would offer.  The product is a play on words utilizing works of literature like "The Bun Also Rises" -- catch the pun? -- "There's nothing so wonderful as an item that delivers what it has promised.  In this case, it's fresh, fresh, freshly risen bread, so fresh it practically deserves to be slapped.  Its buttery-rich crust encases a delicately moist centre, swirled with Spanish chocolate." I simply must try "Much Ado About Muffins"! (recipe included at the book's end)

Vanity Fare offers real potential as a book club selection, focusing on the challenges and changes in Molly's life and how she learned from her past to benefit her and her son's future makes good discussion material.

Megan Caldwell grew up in a remote town in New Hampshire where she devoured every book of fiction in her well-read parents' library.  An English literature major at Barnard College with double minors in political science and religion, Megan wrote and edited reviews for a music industry magazine for fifteen years.  Eventually, she became editor-in-chief and went on to develop conference programs for the industry.  Now she is the community manager for Heroes and Heartbreakers, a romance novel website, where she blogs daily as Megan Frampton about the fiction she reads.  She lives in Brooklyn with her husband and son.

Should you wish to have me review your book on this blog, please visit