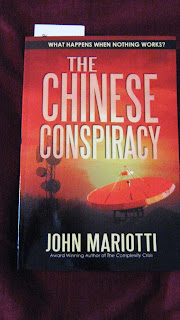 
Content Advisory:  contains scenes of sexual nature, profanity, and violence
(I don't review books that contain this type of material, thus this advisory.  Rated 18 A)
Press release - "Author John Mariotti announces his new cyber-thriller, The Chinese Conspiracy. This fast paced thriller is based around today's headlines of cyber-terrorism.
Your office phone hasn't rung for some time, which is unusual. You pick it up, and you hear a hissing sound. You grab your cell phone, punch in a number, and get an "all-circuits-busy".Your computer monitor shows your home page, so you select a web site and get a "server not responding" message. That's odd! You email your assistant, and ask, "Did if it go through?" The answer is, "no". You turn back to see another "server not responding" notice.
The TV screen behind your desk is filled with snow-the cable is out. The radio doesn't work either-just static hiss. If you go down to the ATM, it'll just spit your card back at you. Bank transactions are dead. On Wall Street, trading has stopped amidst massive confusion. The ticker is dead. The monitors are dead. Everything's dead-"silenced!"
At the airport, the lines are growing; people are restless and confused. No planes are landing or taking off-or even taxiing-ATC is down and the airlines overhead monitors are full of snow. Agents can't ticket passengers or issue boarding passes. Chaos reigns.
From the White House to Congress, the Pentagon to Parliament, nothing related to electronic communications works. It's all completely SILENT. The only things not silent are the car horns in the street outside. It's a veritable cacophony of horns blaring. This scenario is repeated across the country. Nothing works. All electronic forms of communications and computer control have been "shutdown"-TV/Radio, all kinds of phones, the Internet, Wall Street, banking, Air Traffic Control, etc. But how? And by whom? And why?
This totally new form of terrorism-Cyber-Terrorism-potentially the most frightening of all."
My Thoughts:  In the prologue the menace begins with lights within Manhattan turning green at every intersection. Wall Street, New York - all computers are down, the ticker is black and cell phones are not working.  ATM machines are down.  Anything and everything that relies on computers or satellites is out of commission.  In Vegas the casinos have to shut down.  Money transfers don't work.  No email, no cell phones, no internet.  Washington DC - internet down, email down, cell phones not operational. Airports are at a standstill.  What is happening?  More importantly, who is behind it and why?
I could see this novel as a film with some judicious "cuts" of content.   John Mariotti has developed a cyber-thriller that will catch your attention and raise your level of awareness of the dangers that lurk in unseen places:  the hackers, the virus developers, and the like.  This book is available on Amazon.
I was excited at the prospect of reading this novel.  The premise of The Chinese Conspiracy is good, timely and frightening. The plot has been developed with great attention to detail and if it weren't for some of the R-18 content, I would recommend this book whole-heartedly.  Skimming through scenes I'd rather were not included, I found the plot to be thought provoking. However,  I did not finish this novel.  I would have loved to have read it cover to cover but I just couldn't get beyond the content.  So there it is.  An unfinished book.     I'm a believer in the adage, if it's not good enough without adding sex scenes, graphic violence or profanity, then it's not any better with it.  That's my opinion.  I leave it to you, the reader, to determine for yourselves.  It's a personal choice.
Posted by Shirley at 8:15 PM