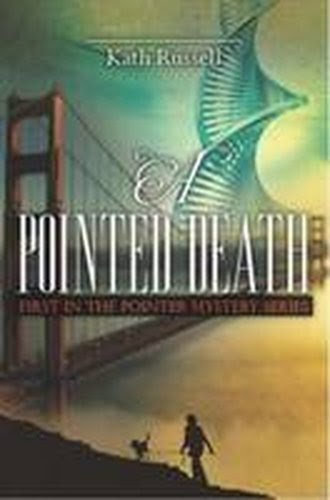 (from the back cover) "Can modern love, biotechnology and murder mix?  They do so exceedingly well in the edgy new thriller, A Pointed Death by Kath Russell.  When techno whiz Nora Billingsley finds her former employee, an amoral creep who was stealing from start up companies, dead, she doesn't she tears.  But she is determined to solve the crime, even as she begins falling for the detective assigned to the case.  Soon, though, both her life and her love are on the line.

Can she solve the case-and save her relationship?
With the help of her short-haired pointer Skootch and the stunning backdrop of San Francisco, Nola unravels a helix of clues to find a murderer.  A Pointed Death reinterprets the thriller as never before.  Smart, funny, and full of  plot twists and turns, A Pointed Death introduces a feisty female heroine solving crimes in the world of high finance, bioscience, and technology."

My Thoughts:
I devoured this book, front to back, totally immersed in the story of Nola Billingsley as she plays amateur sleuth, much to the consternation of her boyfriend, Bob Harrison, a San Francisco city police officer. Kath Russell wrote this book as a light read for professional women to enjoy during flights as they jet set across the world.  "I have tried to produce a good read for professional women to take along on those long, lonely flights.  Although what I wrote is a light, irreverant story, it is set in a very serious industry that has produced enormous value, especially in the healthcare field."  The author once worked within this very field of biotechnology so her knowledge comes firsthand.  This book is a "cockeyed tribute" to that industry.

As I read this novel I marvelled at the intellects within and even more so at the protaganist, Nola, as she repeatedly went about investigating the murder of a former employee, putting herself in peril's path.  For someone so incredibly bright, I had to shake my head at her escapades.  Nola doesn't fully put her trust in the capabilities of the police, though her boyfriend is a member of the force.  Not since her best friend at school was murdered and the investigation produced unsatisfactory results.  The murderer remained at large, unknown.  You can see her lack of faith, can't you?  As the plot climaxes,  and Nola acts on an anonymous tip, the reader wants to yell at her not to do it!  How can someone so bright, act so foolishly?  One wonders.  But that is Nola.  She is intelligent, analytical, silly, quick to act and sometimes think later.  The reader really knows her by the end.  We cheer her on, while questioning her judgment.  Kath Russell did an excellent job of character development throughout this book.

I recommend this novel for those analytical minds out there, for the business woman, for the mother at home raising her children, for the average woman everywhere.  If you like a good mystery, some on the edge of your seat scenes, a story about relationships, and a good chuckle, this book provides all that and more.

This is the second book I've read by Kath Russell.  The first was Deed So (read review), under her full name, Katherine A. Russell.  A Pointed Death could certainly be the beginning of a series starring Nola Billingsley as there are hints throughout the book that could be developed into future novels.

Rated 4/5.  I can't give it a 5/5 as that would leave no room for growth for upcoming novels featuring this character.  Here's hoping the next is soon!