Book Review: The Day Before the Berlin Wall: Could We Have Stopped it? An Alternate History of Cold War Espionage by T.H.E. Hill 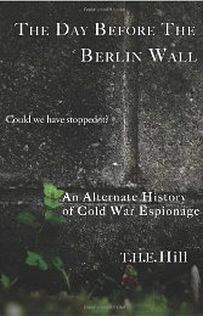 The Day Before the Berlin Wall: Could We Have Stopped It? An Alternate History of Cold War Espionage

Author:  T.H.E. Hill
Publisher: CreateSpace
Copyright 2010
Pages: 188
Source: Review copy received in exchange for review
Genre: Adult Historical Fiction
ISBN 9781453825143
Includes:  Chronology of the Wall, Illustrations and Photographs, German/GI Glossary
Released on the 21st anniversary of the fall of the Berlin Wall 9 November 2010 from T.H.E. Hill, the author of Voices Under Berlin: The Tale of a Monterey Mary
(from the back cover)  "The plot is based on a "legend" that was still being told by U.S. Army soldiers in Berlin in the mid-1970s. According to the legend, we had advance knowledge of the wall, and we knew that the East-German troops who were going to build it had been told to halt construction if the Americans were to take aggressive action to stop them.
In Hill's version of the tale, a young American sergeant is the one who gets this piece of intelligence, but he is in East Berlin and has to get back to his unit to report it. The Stasi (the East German secret police) are prepared to kill to keep him from reporting it. They have killed his postmistress, and framed him for her murder. Now it is not only the Stasi, and the Vopos (the East-German "People's" Police), but also the West-Berlin municipal Polizei and the U.S. Army MPs who are after him. It's the day before construction is scheduled to start, and time is running out, so the sergeant is running as fast as he can.
The key question of the novel is "even if he is lucky enough to make it back across the border, will anybody in the West believe what he has to say and take action on it before it is too late?" History says that he either didn’t make it, or they didn't believe him, or …. You will have to read the book to find out what the third "or" is."
My Review: From the very beginning of the novel, The Day Before the Berlin Wall, I was captivated. Though this is a fictional version of a legend still shared among U.S. Army soldiers, by the book's end the reader is convinced of the truths it portrays.
The main character, Dieter, (one of a few of his alternate identities), is an American soldier taught in the skills of espionage.  When Dieter awakens with a nasty bump on his head and his postmistress dead, he immediately searches the room and finds the hidden papers for which he would risk all.  He is in East Germany but somehow must gain passage past the Stasi (East German Secret Police), the VoPos (East Germany's 'People's Police) and the West-Berlin Municipal Police, to enter West Berlin to share his intel.  Framed for the murder of his 'postmistress,' his photo, beside hers, is plastered all over the papers.  He is a wanted man.  Even his own Army MPs are after him.
I read this novel in a day, totally mesmerized by the story of one American soldier's attempt to pass on his intel at the risk of imprisonment or death.  T.H.E. Hill has created a page-turner that the reader won't soon forget.  The Day Before the Berlin Wall raises several questions.  Should this legend be true, why didn't the US Army prevent the building of the wall, provided they were in possession of the intel?  Was the soldier successful in passing on his information and, if he were, why did USA and Britain ignore it, allowing the wall to be built?  Who benefited from it and how?
The Day Before the Berlin Wall is a gripping tale not only for history buffs, but for lovers of stories of espionage, war, legends and unsung heroes.  It would make a fascinating and controversial movie!
Rated 5/5

Map of pre-wall Berlin (1960) is available online at:  http://www.alt-berlin.info/cgi/stp/lana.pl?nr=9
To learn more about this author, The Day Before the Berlin Wall, and his other published works see:     http://www.voicesunderberlin.com/

T.H.E. Hill served with the U.S. Army Security Agency at Field Station Berlin in the mid-1970s, after a tour at Herzo Base in the late 1960s. He is a three-time graduate of The Defense Language Institute (DLIWC) in Monterey, California, the alumni of which are called "Monterey Marys". The Army taught him to speak Russian, Polish, and Czech; three tours in Germany taught him to speak German, and his wife taught him to speak Dutch. He has been a writer his entire adult life, but now retired from Federal Service, he writes what he wants.
Posted by Shirley at 9:57 AM

Email ThisBlogThis!Share to TwitterShare to FacebookShare to Pinterest
Labels: book review, T.H.E. Hill, The Day Before the Berlin Wall