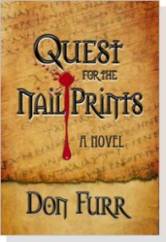 
(Press Release)  Memphis, TN - Feb 8, 2011 - Beyond the realm of what some would call "the box" for lack of a better term, a theory stirs deep with author Don Furr's soul, an insatiable desire floating unconstrained somewhere between the boundaries of truth and imagination.  The concept of time travel.  And though logic seemingly wars against it, Don Furr wrestled with a creative spirit and found the courage to dream.


Haven't we all dreamed of walking with Jesus? Wondered what it would be like to talk with Him as He peers into our eyes and tells us the secrets of why. Do you long to touch His face and calloused hands, knowing full well that your only response could be nothing more than a trembling smile as He brushes away your tears and peers into your soul? Do you want to hold Him close and never let go? What if you could touch the scars and thank Him for what He did for you? For us all.


Quest for the Nail Prints is the story of three ordinary people, chosen by God for an extraordinary opportunity. A journey so amazing, even they have a hard time believing that it is real. Through unrelated circumstances, Dr. Elizabeth Stewart, Reverend Paul Ryann and Professor Leonardo Van Eaton find themselves sharing a journey to the Holy Lands...when suddenly they are thrust back in time nearly two thousand years and find themselves face to face with the rugged radical Nazarene known throughout the region as Jesus of Nazareth.


This is the story of how a personal encounter with the living Christ in His time creates the journey of a lifetime!  With thousands of books on the market, what makes this one different? There is literally a hole punched through the entire book, from front to back.

There is something so fascinating and surreal about time travel.  Many have tried to achieve the ability to travel back into history.  In Quest for the Nail Prints, Don Furr does just that.  The reader is captivated in this page turner as the three characters in this novel; Dr. Elizabeth Stewart, Reverand Paul Ryann, and Professor Leonardo Van Eaton; for various reasons, travel to Jerusalem.  After witnessing a murder, the three must run for their lives.  Terrified, they find an unlocked door which they enter in, seeking refuge.  When the floor collapses they fall back in time, back to the days of Jesus.   Two are drawn to the crowd surrounding Jesus and join them, walking with Him and His disciples the days prior to His arrest, torture and crucifixion.  One disappears, on a quest of his own.

Quest For the Nail Prints is artfully written, with each character carefully developed and portrayed.  This is a story of betrayal, denial and pure love.  It doesn't matter your religion, this work of fiction will draw you in and keep you captivated.  I enjoyed every minute of it!

From the Author:  Why the Hole?


"The idea of the nail hole surfaced during the first draft," said Don Furr. "From the very start, I knew the part the nails would play. From there, the process simply took its natural course. The idea quickly flourished into the nail prints marking every page, much in the same way I picture the nails touching every page of our lives. It only seemed natural that they should touch every page of the story."

"Quest for the Nail Prints has been a dream come true for me! I have lived it, dreamed about it and even carried my laptop all over the world while writing it. From my home here in Tennessee to the icy waters of Alaska. From Mount Haleakala in Maui to Paris to London to Spain and Amsterdam. From the mountains of Romania to the dusty roads of Jerusalem-twice, even!"

"This story has bits and pieces of all of those places intertwined within its pages, and yet, it's as if the story has only begun. In my heart I guess I'll never be finished with it, not completely, but for the sake of the reader, there is a final chapter. I hope you enjoy the journey as much as I have."
--------

The book is available at Amazon, Barnes and Nobles, Books-a-Million
B&N link is: http://search.barnesandnoble.com/Quest-for-the-Nail-Prints/Don-Furr/e/9781936438020/?itm=1&USRI=quest+for+the+nail+prints
Posted by Shirley at 1:46 AM