Saturday evening, early show of course, my husband indulged my desire to go to Titanic in 3D.  It's not his favourite movie:  "it ends the same every time - in disaster," he would say.  But, this being the last weekend for the 3D version to be shown, he and I went.  The parking lot was so full he had to park about a block away, near the restaurant way across the lot!  The nice thing about this particular theatre, UltraAVX, you get to select  your seats.  So, I found two together, which was harder than you might think, and they were at the back of the theatre - bonus!!  With 3D glasses on, we settled in amongst a theatre full of fans.
I read an interview with James Cameron prior to attending the showing wherein he was questioned why he decided to show a 3D version of Titanic.  His reply was he felt that while most movies do not warrant the 3D effect, Titanic did.  As the director of Avatar, which is phenomenal in 3D, I took his word for it, imagining pieces of the iceberg flying into the audience upon collision.  Sadly, no such occurrence presented itself.  While one felt as though they were in the first class dining room with Ismay, Mary Brown and guests, the 3D effect wasn't all that "wow" for me.  No ice flying into the audience, or anything dramatic like that, occurred.  The entire movie came off as a subtle 3D effect for me.  I removed my glasses a time or two to compare 3D and not 3D and wasn't blown away by the difference.  It took Cameron's team one year to alter the film for 3D.  I wonder just how many people went just because it was 3D, having seen the original, like me?  It would be interesting to know the opinions of first-time viewers of Titanic to see if they thought the 3D was vital or just a subtle overall effect.  I just don't think it made that much of a difference.  I am glad to have gone to see it, but being a Titanic buff, I would have gone even if it weren't in 3D.  Simply releasing it again to commemorate the anniversary of the Titanic tragedy, would have drawn the numbers, I think.
Did you see the movie in 3D?  What is your opinion? 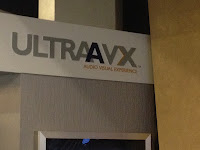 What is Ultra AVX?
UltraAVX: "The Next Level of Cinema"
Cineplex Odeon's UltraAVX, or Ultra Audio Visual Experience, is a term for "movie theatre with perks," and has been dubbed "the next level of cinema" by those who created it.  UltraAVX provides the following features:

This is the theatre we saw Titanic in.  Was it better than the average theatre?  Yes, I have to say it was.  The seats were more comfortable than the average theatre seating and the fact that it is reserved allows one to choose their favourite location in the audience to view the movie.  It is a very nice option and I'd say it is worth the difference in cost.  I'd hate to be the ones in the front row craning their heads back to watch a movie on that enormous screen!
Posted by Shirley at 1:34 PM