Inconvenient Indian Recognized With a $40,000 Prize 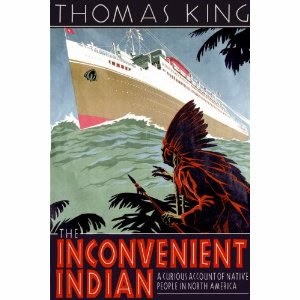 February 21/14:  Thomas King was the recipient of the BC National Award for Canadian Non-fiction.  He was presented the $40,000 prize at a ceremony in Vancouver, BC.

"The Inconvenient Indian is at once a 'history' and the complete subversion of a history—in short, a critical and personal meditation that the remarkable Thomas King has conducted over the past 50 years about what it means to be “Indian” in North America.
Rich with dark and light, pain and magic, this book distills the insights gleaned from that meditation, weaving the curiously circular tale of the relationship between non-Natives and Natives in the centuries since the two first encountered each other. In the process, King refashions old stories about historical events and figures, takes a sideways look at film and pop culture, relates his own complex experiences with activism, and articulates a deep and revolutionary understanding of the cumulative effects of ever-shifting laws and treaties on Native peoples and lands.
This is a book both timeless and timely, burnished with anger but tempered by wit, and ultimately a hard-won offering of hope – a sometimes inconvenient, but nonetheless indispensable account for all of us, Indian and non-Indian alike, seeking to understand how we might tell a new story for the future." (Random House)

The finalists were awarded $2500 each.  They are as follows:  Carolyn Abraham for The Juggler's Children: A Journey Into Family, Legend and the Genes That Bind Us; J.B. MacKinnon for The Once and Future World: Nature As it Was, As it Is, As it Could Be; Graeme Smith for The Dogs Are Eating Them Now: Our War in Afghanistan; and Margaret MacMillan for The War That Ended Peace: The Road to 1914.