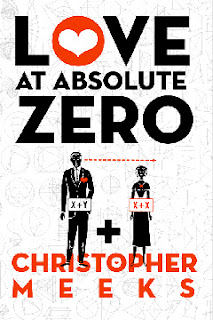 Absolute zero—or very near it—is the coldest anything can get. It can get extremely cold in Canada and Minnesota (where I’m from) and thus -32 C (or -25 degrees Fahrenheit for us in the U.S.) is so cold that it’s just not pretty. Your nostrils sting breathing in that cold. Cars don’t start. However, that may as well be the sun for how cold cold can get. Absolute zero is 0° on the Kelvin scale, −273.15 ° on the Celsius scale, and −459.67 °F.
Cold and heat is just a reference to how fast atoms bounce around. The hotter something is, the faster the atoms move. Theoretically, absolute zero is where atoms stop moving. However, atoms never stop moving. We can only get within a few billionths of a degree from absolute zero, and at that temperature, atoms change and form a new state of matter called Bose-Einstein Condensates (BECs). The previously known laws of the universe change with BECs. For a cool YouTube video on BECs, click here.
How does "absolute zero" relate to the search for love?
That’s the fun of the novel, for the reader to see how love and quantum mechanics connect. Atoms in a Bose-Einstein Condensate lose their identity—so do people in love and those in misery from the loss of a love. Physics and love interconnect on so many levels. It might take the whole book to see, but it’s a fun journey.
You write of physics with a great depth, demonstrating a comprehensive understanding of the concepts of which you write.  Did you take physics in school or is your knowledge a result of extensive research?
Both. I took a great class at the University of Denver, physics for non-majors. The professor gave all sorts of wonderful demonstrations. In my junior year abroad in Denmark, I lived with a family whose neighbor was a physicist, and he loved talking about how everything in our world comes down to 92 natural elements. The taste of your lover’s saliva, the fire where you cook marshmallows, the tent you sleep in—all are part of 92 natural elements. Scientists have a different way of seeing things.
I had to research a lot, however, to grasp a basic sense of quantum mechanics, and then I had to explain it to readers without boring anyone or drifting away from the story. It’s a tricky balance. Story comes first, then the science slips in where it doesn’t hurt anyone.
Who is your greatest influence in life?  In your writing career?
We are all products of our environment, driven by whatever mysterious commands are in our DNA. In my Blake High school class of sixty-three young men, I was not the English geek or the jock or any of the many brilliant boys in the school. Al Franken, now Senator Al Franken, was a few years ahead of me. I have to say the school encouraged me in my senior year to try new things, to push myself, and I’ve done so ever since.
My mother was a voracious reader, and when I started writing, she became a fan long before I deserved to be. My father loved that I was writing stories, but he was also a tough critic. It was probably after my first book was well received that he saw that my stories could have open endings.
I’ve had some great mentors—author Thomas Thompson, playwrights David Scott Milton, Jerome Lawrence, and Robert E. Lee. Each held my plays or prose and went over them and gave me great advice.
I also learned a lot from reading my favorite authors, such as Tim O’Brien, Lorrie Moore, Margaret Atwood, John Irving, J.D. Salinger, Kurt Vonnegut, and many more. I also teach Children’s literature, and there’s a lot to learn from J.K. Rowling.
You’ve mentioned teaching English and writing on the college level.  Has that helped you to analyze your writing process differently than you think others might write and edit their own work?
Teaching should also be on the list as a major influence in my life. Writing well cannot be done without reading a lot, and teaching novels has made me look closely at what certain writers do. I push myself to try new books every semester, even though it’s a lot more work, because I learn so much from each new novel. How the students react is important. What grabs their imaginations is so fun to see. When I witness that, I hope I find readers like them for my books.
In my Introduction to Literature classes, we study fiction, drama, and poetry—all of which can help any creative writer. Teaching is important because I’m witness to young people’s thirst for knowledge. I hope not to take away from that thirst but to let their genius come out. Teaching is a real balance in my life. It helps feed my writing.