So he did it!  My husband attended a book launch event with me today mostly because it was the Robin Esrock presenting his one of a kind travel experience book The Great Canadian Bucket List.  I'd attended Robin's previous event at Audrey's bookstore (and purchased a copy) here in Edmonton last fall with a friend of mine and when I told my husband who we'd been to see and support, he was disappointed he hadn't gone after all.  So, when I discovered this Armchair Traveller event/book launch with the St. Albert Public Library featuring none other than Robin Esrock, he was thrilled to go...even delayed a business trip to do so!!!  He was not disappointed!!

The conference room was near capacity but we arrived early, thus assured of excellent seats second row from the front.  Robin was casually signing books before the event at the back of the room where light refreshments of cookies and coffee were available. Following a brief introduction and bio from the PR rep for the library, Robin took center stage by the overhead screen upon which his presentation awaited the two o'clock start.

starring Morgan Freeman and Jack Nicholson.  (If you haven't seen it yet, you simply must!)  The term bucket list has become very popular since the release of this movie.  Perhaps the term's origins come from history when people who were hung to die had a bucket kicked out from beneath them?  Robin pondered.  Whatever its origins, more and more people are making their own lists of things they want to see, accomplish or experience before their death.

Robin didn't set out to become a travel writer per se.  Sure he has a degree in journalism, but he has also had involvement in the music industry.  He made some life changing decisions with a $20000 settlement from an accident several years ago following which he went to a travel agency and booked an around the world trip.  His intention was to cross off all those items/places on his bucket list and write home about it.  It became easier to share his adventures and photos on a blog until the day someone suggested this would make a good travel show and then a television program "Word Travels" with Julia Dimon as co-host began.   The show ran for three seasons and can still be seen on weekends on CityTV.  Check your listings.  (a presentation of photos and a few videos from some of these adventures impressed the audience as they were shown on the overhead screen.) 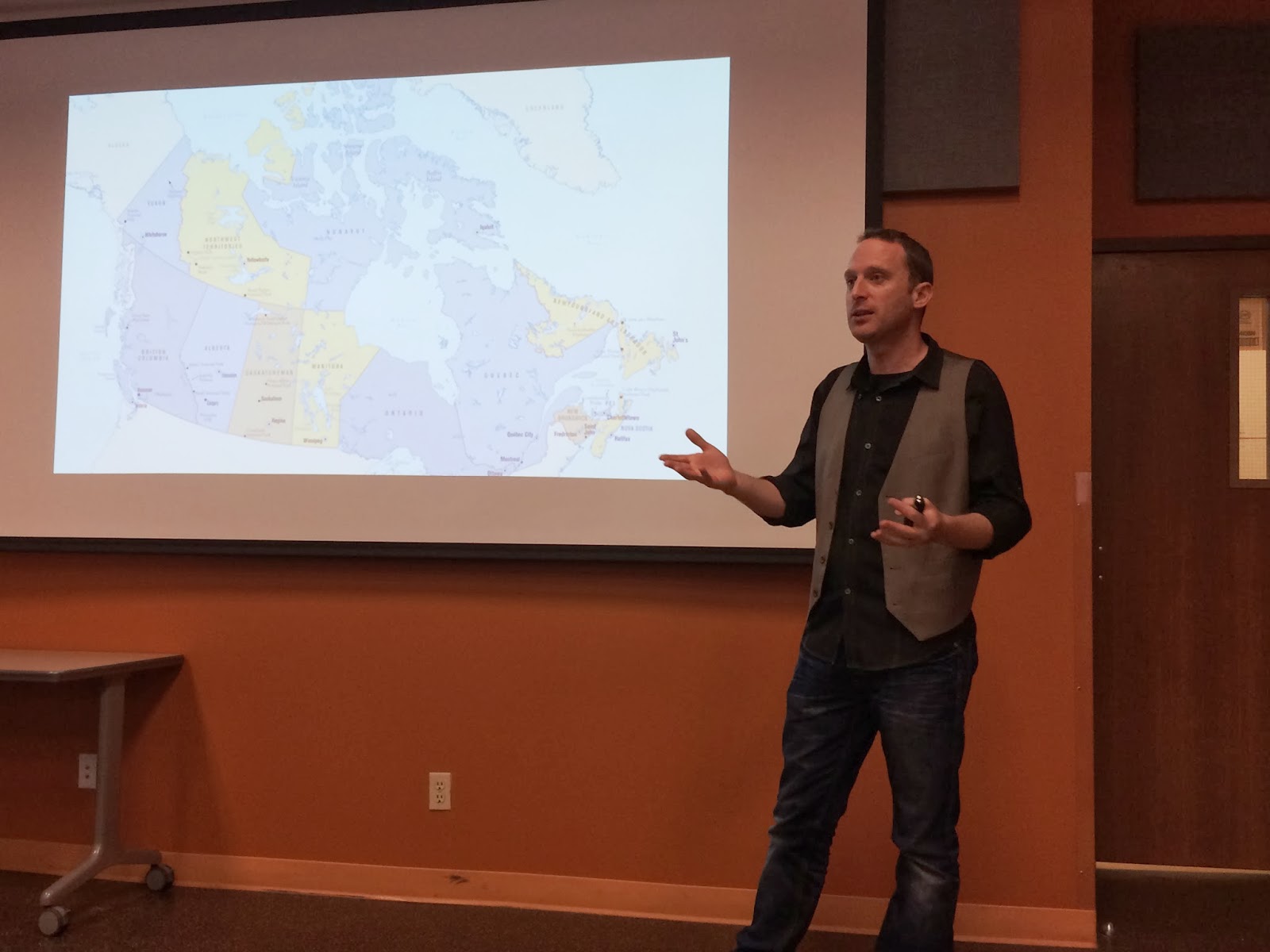 When civil unrest and wars became prevalent, Robin Esrock emigrated to Vancouver Canada from South Africa as a young adult and his family following shortly thereafter.  After travelling the world, crossing off that bucket list, he began to think a little closer to home for his new bucket list, thus his new book "The Great Canadian Bucket List." 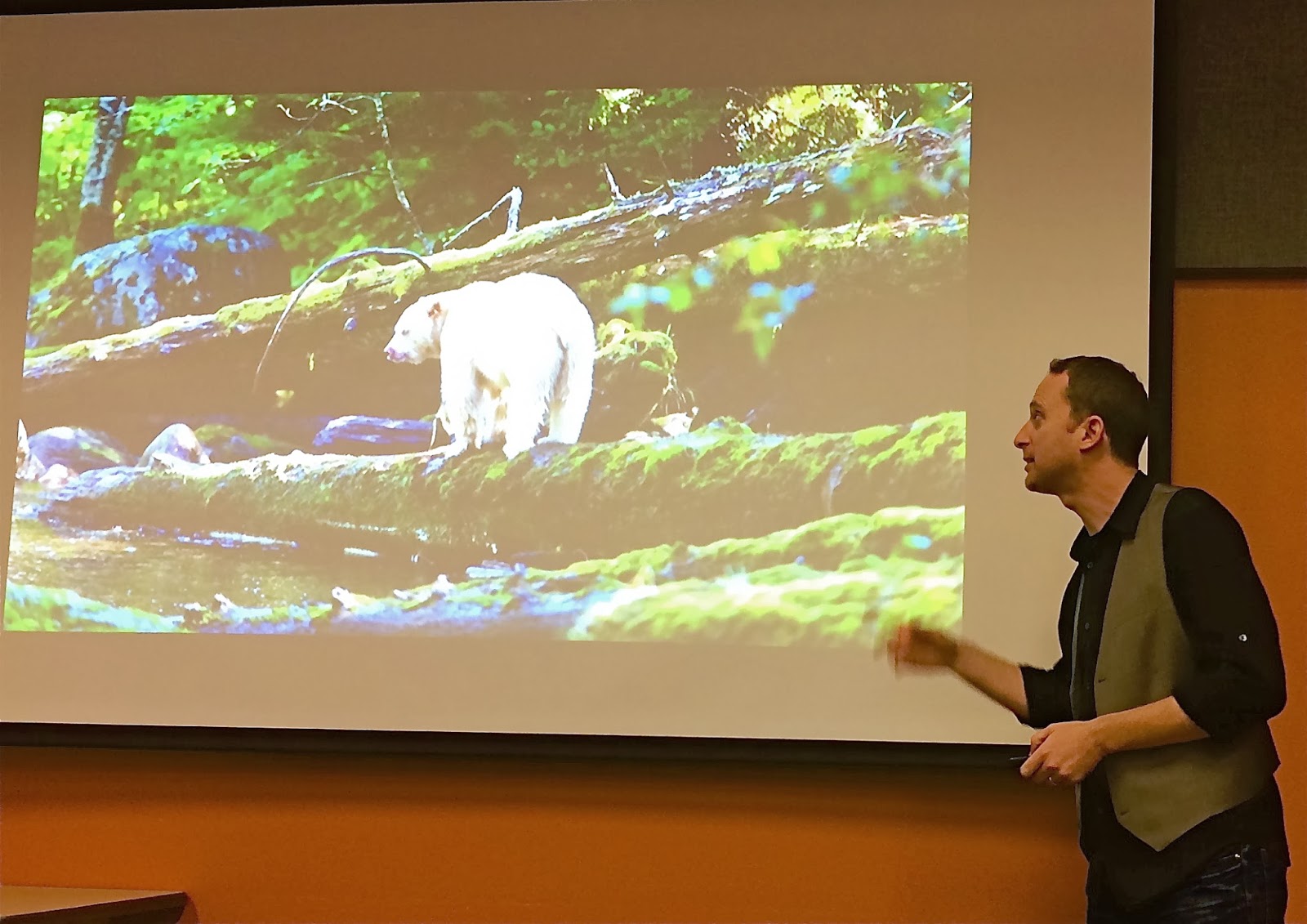 From the west coast to the east, Robin shared tales of seeking the great white spirit bear, to seeing totem poles over 150 years old, to a one of a kind experience in the Okanagon (BC) in a facility owned by Swarovski (yes, one and the same).  Imagine entering a room at -15 Celsius, then another at -60 Celsius and finally -110 Celsius (a 3 minute duration) dressed in only your swimming attire!  This supposedly helps rejuvenate the body, help with ailments such as arthritis, and certainly make you glad you're alive when you slowly warm up again!! (All available at this secluded site)  It's a hit with NHL players! There's the sour toe drink in Yellowknife, zip lining over a waterfall, heli-skiing, training with the RCMP, going on a polar bear excursion in Churchill, Manitoba and so much more.  Did you know our country had so much to offer?

Robin has travelled world wide.  Of course there are countries and sites he hasn't been to yet; Antarctica still eludes him.  Perhaps someday; after all, who knew ten years ago that he'd be travelling the world and getting paid to do so?  In the meantime he is learning and writing about what it is like to travel with a baby!

Perhaps it's time for you to discover your own bucket list.  The Great Canadian Bucket List is a great place to start.  Just a warning though, once you get the bug it only grows from there! 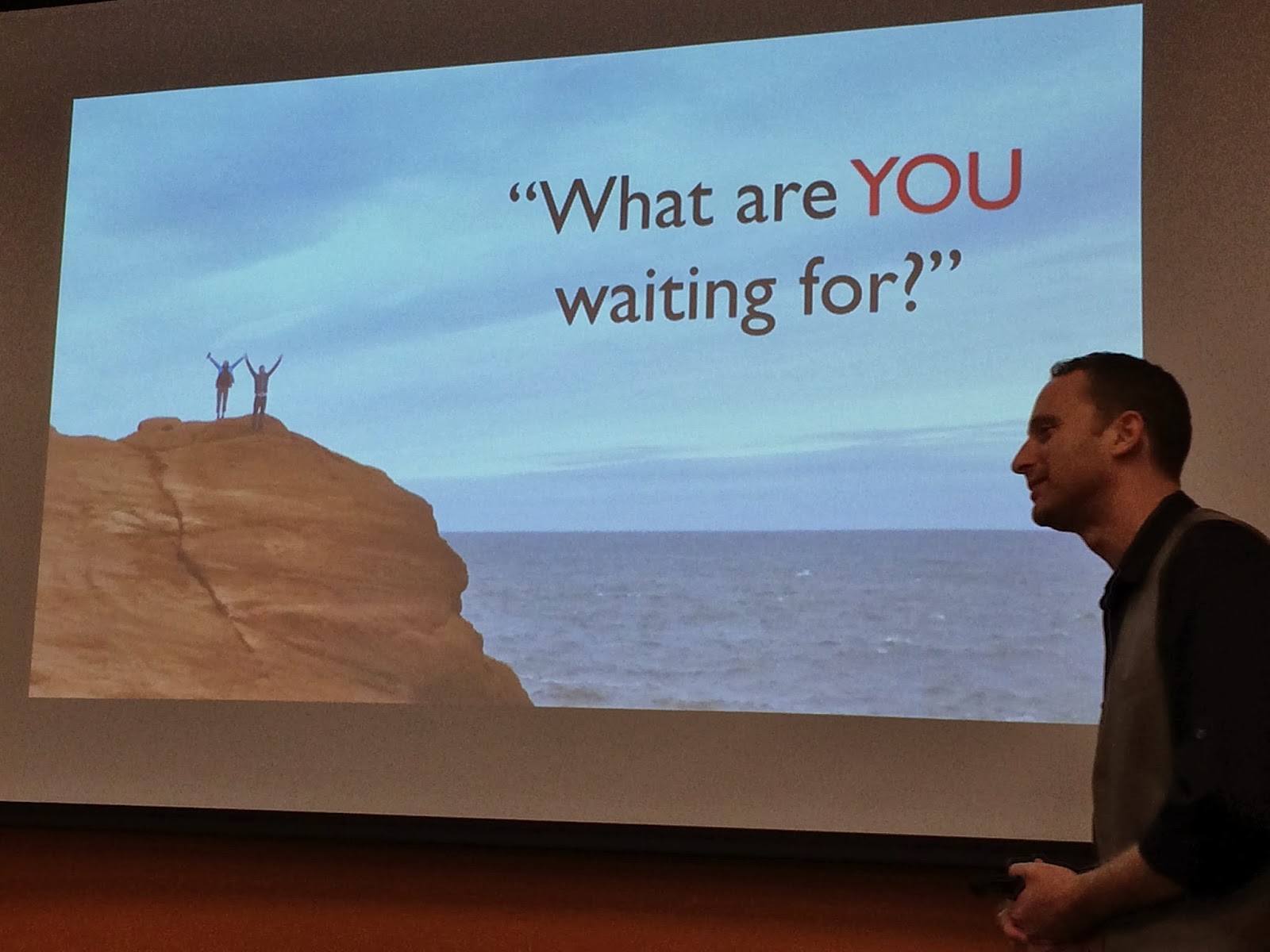