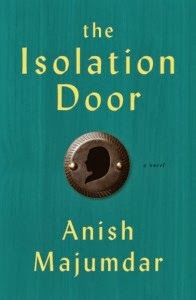 The Isolation Door
Author:  Anish Majumdar
Published:  February 4, 2014
Publisher:  Ravana Press
Pages:  304 pages
Advanced Review Copy
Genre:  fiction
Source:  a complimentary copy was provided by the publisher and TLC Book Tours to facilitate this review which bears no influence over my opinion nor this review.

Neil Kapoor, 23, is desperate to create a life beyond the shadow of his mother’s schizophrenia. Years of successive relapses and rehabilitation’s have forced his father into the role of caretaker and Neil into that of silent witness. But there is no light within this joyless ritual, and any hope for the future rests on finding an exit.
Amidst her latest breakdown, Neil attends drama school in pursuit of a role that might better express the truth of who he is. What started as a desperate gambit becomes the fragile threads of a new life. A relationship blooms with Emily, and each finds strength – and demons – in the other. New friendships with Quincy and Tim grow close and complex. But the emotional remove needed to keep these two lives separate destabilizes the family. Neil’s father, the one constant in the chaos, buckles under the pressure. Enlisting the aid of an Aunt with means and questionable motives, Neil plies ever-greater deceptions to keep the darkness at bay. But this time there will be no going back. As his mother falls to terrifying depths a decision must be made: family or freedom?
In this powerful fiction debut, Anish Majumdar shines a much-needed light into the journey of those coping with serious mental disorders and the loved ones who walk alongside them. Incisive and filled with moments of strange beauty, it marks the arrival of a unique voice in American letters.
My thoughts:
Anish Majumdar is an award winning journalist with awards for feature writing and investigative journalism.  Majumdar refocuses that talent in the field of fiction with the publication of The Isolation Door.

Neil's family is a challenge and a bit shameful to speak of.  His mother, once an extra in a few movies (a "star"), struggles with schizophrenia and is at the point where Neil's father feels he can do no more and has called an institution to take her away.  He is devastated to do so but can no longer manage the situation alone. Neil is not much help.  He'd rather leave than try to come to terms with life as it is.  With the financial assistance from his mother's sister, Neil enrols in acting classes at a local college where he makes a few friends and a girlfriend. He is too ashamed of his family to allow any introductions between his girlfriend and his parents, that he keeps quiet when his girlfriend assumes Neil's aunt is his mother.  After all, his aunt has it together, he thinks, and she paid his tuition, bought furnishings for their apartment, and is at the ready to help at any time.  A great aunt, you might say.  But does she have an ulterior motive?

The road to acceptance for Neil is a rocky one and one can understand why he feels as he does and yet where's the empathy?  The love for his parents?  Neil has to make some very big decisions and take on responsibilities that he wasn't heretofore willing to.  Perhaps experience is the best teacher.

The Isolation Door is a coming of age story mingled with mental illness, shame, desires, love, denial, secrets, and loyalty.   A first person look into the lives of a patient suffering with schizophrenia and the effects upon her family, this story can be harsh to the point of cruelty, sad to the point of tears, and stunning in the revelations.

Mature content including several mentions of flaccidity, abuse, sex, and drug use makes this a novel not for everyone.  The first half moved rather slowly for me but the plot picked up pace in the second half.  I don't quit on books easily and I am glad I stuck with this one for the sheer revelations it offers regarding mental illness and its profound effects on the family.

The Isolation Door would be a good study for a sociology or psychology major for the impact of mental illness and family dysfunctions upon an individual and society as a whole. 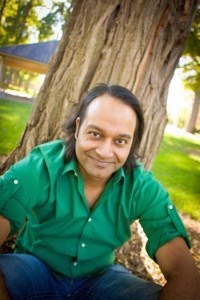 As a child growing up in Montreal, Canada, Anish Majumdar’s first creative writing lessons came courtesy of his mother, a former English teacher. Witnessing her struggle with schizophrenia had a profound impact and inspired The Isolation Door, his first novel. His non-fiction work, appearing in many publications, has garnered Independent Press Association Awards for Feature Writing and Investigative Journalism. His short fiction has been nominated for the Pushcart Prize. He lives with his wife, son, and a growing menagerie of pets in Rochester, NY.