The Headmaster's Wager by Vincent Lam 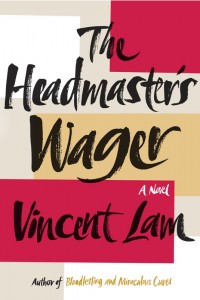 Source: Many thanks to TLC Book Tours and the publisher for providing a complimentary copy of The Headmaster's Wager.  Receipt of this novel doesn't influence my opinion nor this review.  The opinion expressed here is my own.

Percival Chen is the wealthy headmaster of the most respected English-language academy in Saigon in 1966.  Chen is fiercely proud of his Chinese heritage, and quick to spot the business opportunities rife in a divided country. He builds a rich life for himself and his only son, Dai Jai, through his many contacts and clever negotiations.  But Chen also has many failings: he is a bon vivant, a compulsive gambler at the high-stakes mahjongg tables,   and has a taste for drink, as well as a weakness for women.
When Dai Jai gets into trouble with the Vietnamese authorities, Chen faces the limits of his connections and is forced to send him back to China, albeit reluctantly. In the loneliness that follows, Chen finds solace in Jacqueline, a beautiful woman of mixed French and Vietnamese heritage.  But Chen’s new-found happiness is precarious, and as the complexities of war encroach further into his world, he is forced to confront the escalating tragedy around him.
THE HEADMASTER’S WAGER illuminates the experiences of the Chinese community within Vietnam, at a time when Asian traditions and world events collided, the emotional dynamics of inter-racial romances in wartime Vietnam, and the activities of the Vietnamese secret police during the war. This sweeping novel also vividly recounts the Japanese occupation of China, the French colonization of Vietnam, and the Chinese Cultural Revolution. Lam masterfully brings these major historical events to life through a story that explores both the complexities of war and the enduring bond between a father and son. (TLC book tour)
My Review:

I was really excited to see this book come up on the TLC book tour because I'd heard so much about it and the author Dr. Vincent Lam and, to top it off, it was on the long list for the much touted Scotiabank Giller Prize.

Unfortunately, sometimes the books we look most forward to, fall short of expectation.  This is the case for me with The Headmaster's Wager.  I found it difficult to get into and far too easy to set aside for another book.  But first, let me tell you about the book.  The story takes place in China and Vietnam during the Vietnam war when Japan occupies the country and the Americans come to the aid of the Vietnamese.  The historical context was interesting but the horrors that some lived and died through were a bit graphic for my taste.

Percival Chan finds himself in the unenviable position of feeling responsible for his son's fate when he, himself, had stood up for what he believed which in turn was copied by his son with horrifying results.  During this period of unrest, it was unwise to speak one's opinion if it was against the Vietnamese Secret Police or the Japanese, or policies instituted by either.  His son, Dai Jai does just this in class one day, resulting in the arrest and brutal torture of this high school age boy.  Horrifed, somewhat guilt-ridden, and worried beyond all cares, Percival must find the means in gold to pay off a man whom he hopes will set his son free.  But Percival has to go to loan sharks and other questionable characters to obtain the payoff.

Percival is not a stranger to risks and his willingness to do anything to save his child is something I and parents everywhere can relate to, without doubt.  However, his recklessness with the money he'd acquired with which to make payments to these same shady individuals, put him on shaky ground with me.  Percival has many vices, gambling and ladies of leisure are but two, and as I got to know him a little better, I couldn't find the empathy I hoped to have for him. For instance, with the money in hand to make a substantial payment to one creditor, he hit up the mahjongg tables, against the pleas of his good friend, and gambled the night away.  He risked the possible loss of his family home due to his debts (compiled both through his efforts to rescue his son and from his aptitude for gambling at the mahjongg tables), hawked his car, bought it back, only to hawk it again. This resulted in making me feel a distinct lack of compassion and empathy for him which didn't improve.

I wish I could share more positive thoughts on The Headmaster's Wager, but this is one that I did not enjoy very much.  But that is my opinion.  Read it for yourself and then we can discuss it.

DR. VINCENT LAM is from the expatriate Chinese community of Vietnam. Born in Canada, Lam is an emergency physician and a lecturer with the Department of Family and Community Medicine at the University of Toronto.  He has also worked in international air evacuation and expedition medicine on Arctic and Antarctic ships.  Dr. Lam’s first book, Bloodletting and Miraculous Cures, won the 2006 Giller Prize and has been adapted for television and broadcast on HBO Canada..