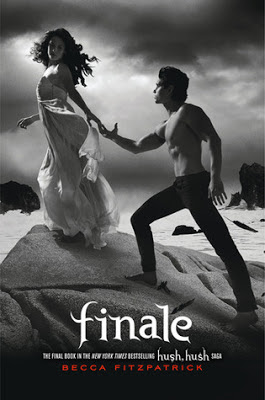 The last book in the YA Hush Hush saga will release tomorrow!  Fittingly titled Finale, this novel follows up Hush Hush and Silence.

The GoodReads synopsis reads:  "Fates unfurl in the gripping conclusion to the New York Times bestselling Hush, Hush saga. Nora is more certain than ever that she is in love with Patch. Fallen angel or no, he is the one for her. Her heritage and destiny may mean they are fated to be enemies, but there is no turning her back on him. Now Nora and Patch must gather their strength to face one last, perilous trial. Old enemies return, new enemies are made, and a friend's ultimate betrayal threatens the peace Patch and Nora so desperately want. The battle lines are drawn—but which sides are they on? And in the end, are there some obstacles even love can't conquer?"

My daughter is super excited to read Finale, so of course I will be buying it for her.

I haven't yet read this series.  Have you?  Would you recommend I give it a try?
Posted by Shirley at 6:23 PM