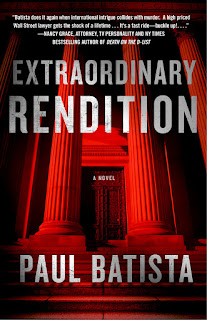 Recently, Lauren of Blue Dot Literary approached me regarding spotlighting this suspense filled legal thriller on My Bookshelf.  So, I read the summary (below) and couldn't resist taking it on!  Today and tomorrow I will be posting excerpts of chapter one and hope you too will be excited about Extraordinary Rendition.
Take a look.....
When Ali Hussein—suspected terrorist and alleged banker for Al Qaeda—is finally transported from Gitmo to the US mainland to stand trial, many are stunned when Byron Carlos Johnson, pre-eminent lawyer and the son of a high-profile diplomat, volunteers as counsel.  On principle, Johnson thought he was merely defending a man unjustly captured through Rendition and water-boarded illegally. But Johnson soon learns that there is much more at stake than one man’s civil rights.
Hussein’s intimate knowledge of key financial transactions could lead to the capture of—or the unabated funding of—the world’s most dangerous terror cells. This makes Hussein the target of corrupt US intelligence forces on one side, and ruthless international terrorists on the other.  And, it puts Byron Carlos Johnson squarely in the crosshairs of both.
Pulled irresistibly by forces he can and cannot see, Johnson enters a lethal maze of espionage, manipulation, legal traps and murder. And when his life, his love, and his acclaimed principles are on the line, Johnson may have one gambit left that can save them all; a play that even his confidants could not have anticipated. He must become the hunter among hunters in the deadliest game.
Written by no-holds-barred-attorney Paul Batista, Extraordinary Rendition excels not only as an action thriller, but as a sophisticated legal procedural as well; tearing the curtains away from the nation’s most controversial issues.
Provocative. Smart. Heart-pounding. A legal thriller of the highest order.

AN EXCERPT FROM
CHAPTER 1
OF
EXTRAORDINARY RENDITION
BY
PAUL BATISTA

Note: the copyright for this excerpt belongs to the author and is supplied with permission by Paul's publicist.


Part II continues tomorrow.  Meet the author too!  See you then!