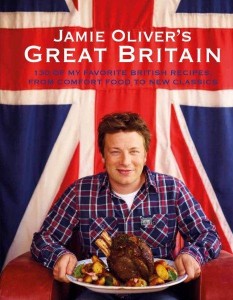 Full colour photos throughout featuring recipes and shots of the English countryside and people
Source:  I received a complimentary copy of Jamie Oliver's Great Britain in exchange for an honest and unbiased review.  My thanks to TLC book tours and Hyperion publishing (a division of Harper Collins)

2012 is Great … for Britain, with the Queen’s Diamond Jubilee, the Olympics, the Paralympics, and now, a mouthwatering new cookbook from always-food-revolutionary chef, Jamie Oliver.
Having grown up in his parents’ gastropub, Jamie Oliver has always had a special place in his heart for British cooking. And in recent years, there’s been an exciting revolution in the British food world in general. Chefs, producers, and artisans are retracing old recipes, rediscovering beautiful ingredients, and focusing on simplicity and quality. Jamie celebrates the best of the old and new (including classic British immigrant food) in his first cookbook focused on home.
Here are over 130 delicious recipes for you to cook at home, ranging from salads—Heavenly Salmon and Epic Roast Chicken; to puddings—Rhubarb and Rice Pudding and Citrus Cheesecake Pots; to Sunday lunch—Guinness Lamb Shanks and Roast Quail Skewers; to new British classics—Jerk-Dressed Bristol Pork and Roasted Veg Vindaloo; and, of course, the crumbliest scones. For Jamie, the heart and soul of real British cooking is food that makes you happy and puts a smile on your face. And that’s what he wants to share with you: the real essence of British food, done properly.

Can I say how much I love this cookbook? Even if I never made any of the recipes within (which of course I did and will), the photography of the English countryside, restaurants, shops and the people endear this book to my heart.  Ancestors of mine on my mother's side immigrated from England and I have fond memories of some of the dishes my grandmother once made.  Not only that, I have watched Jamie Oliver's cooking show on HGTV too!

As I leaf through this hefty hardcover cookbook, I am instantly drawn to the photography and to the stories Jamie tells about his home country.  It's almost as good as being there.  Jamie makes this a personable visit to England with his family along for the ride.  His wife, Jools (I love that name!  Ever since My Best Friend's Wedding with Julia Roberts in the starring comedic role!), and their children appear on two page spreads representative of the love of home, family and country and good food.  There are shots of his children helping in the garden and it all makes this book more than just a cookbook.  It captures a place and time within Jamie's and his family's lives to be shared with his fans and cook connoisseurs alike.

From breakfast dishes like scones, to haggis, to lamb dishes and the most scrumptious desserts and so much more, the reader/cook will find ample reasons to discover a new family favourite from within the pages of Jamie Oliver's Great Britain.

Following a brief biography below are some delicious recipes, reprinted here with permission, that you will definitely want to try soon!

JAMIE OLIVER began cooking at his parents’ pub at age eight; his television and publishing career began in 1999 with the Naked Chef book and television series. Since then, he has transformed school lunches in the UK and revolutionized home cooking around the globe. His U.S. charity, The Jamie Oliver Food Foundation, seeks to combat the obesity crisis by improving school food and keep cooking skills alive by providing practical resources and education about health and nutrition. Jamie is a frequent guest on the Today show, Good Morning America, The Oprah Winfrey Show, and The Late Show with David Letterman. His food shows air on the Cooking Channel and his campaign series, Jamie Oliver’s Food Revolution, broadcast by ABC, won an Emmy for Outstanding Reality Program.
He lives in London and Essex with his wife, Jools, and their children.
For more information on Jamie Oliver please visit http://www.jamieoliver.com.
EMPIRE ROAST CHICKEN
BOMBAY ROASTIES | AMAZING INDIAN GRAVY

Ask any British person what their two favorite meals are and I reckon most people would say their mum’s roast chicken, and a curry. Well, welcome to Empire roast chicken, a combination of both of those things. Your friends and family are going to love it. I love it. You will love it.

Slash the chicken’s legs a few times right down to the bone. Get a baking sheet slightly bigger than the chicken, then add all of the marinade ingredients and mix together well. Put on a pair of clean rubber gloves, then really massage those flavors over and inside the chicken so it’s smeared everywhere. Don’t be shy! Ideally marinate overnight in the fridge.

Preheat the oven to 400°F and organize the oven rack so the baking sheet can sit right at the bottom, the chicken can sit directly above it, right on the rack, and the potatoes can go at the top. Halve any larger potatoes, then parboil them in a large pan of salted boiling water with a whole lemon for about 15 to 20 minutes, or until the potatoes are cooked through. Drain the potatoes then let them steam dry. Stab the lemon a few times with a sharp knife and put it right into the chicken’s cavity. Move the chicken to a plate.

Roughly chop the onions and add to the baking sheet along with the cinnamon stick, cloves, vinegar and Worcestershire sauce, then whisk in the flour. Pour in the stock or water, then place this right at the bottom of the oven. Place the chicken straight on to the bars of the middle shelf, above the baking sheet. Cook for 1 hour 20 minutes.

Put another sturdy baking sheet over a medium heat and add the olive oil, a knob of butter, the mustard and cumin seeds, garam masala and turmeric – work quickly because if the fat gets too hot the mustard seeds will pop everywhere. Halve a bulb of garlic and add it straight to the pan, with the sliced chile and chopped tomatoes. Add your drained potatoes to the tray, mix everything together, then season well. Finely slice and scatter in the cilantro stalks, and keep the leaves in a bowl of water for later. After the chicken has been in for 40 minutes, put the potatoes in.

Once the chicken is cooked, move it to a board and carefully peel off the dark charred bits to reveal perfect chicken underneath. Pass the gravy through a coarse sieve into a pan, whisking any sticky goodness from the pan as you go. Bring to the boil and either cook and thicken or thin down with water to your preference. Put it into a serving bowl and drizzle over a little yogurt. Get your potatoes out of the oven and put them into a serving bowl, then serve the chicken on a board next to the sizzling roasties and hot gravy. Sprinkle the reserved cilantro leaves over everything and serve with any condiments you like. Life doesn’t get much better.

For the chicken and marinade

On my travels around Bristol I spent an afternoon with Leona, who runs the Boiling Wells cafe in the allotment gardens. She’s a lovely young lady and a real food activist in many ways. What’s more, she’s a great cook, and I’d rather eat food made by a great cook than a great chef any day of the week. The food she makes is clearly a reaction to the wonderful ingredients she gets from the allotments, which are a stone’s throw from her cafe. She knocked out this soup for me, which I’ve tweaked slightly. I genuinely love it.

Preheat the oven to 400°F. Very carefully(!) peel and slice the squash lengthways and scoop out the seeds. Cut into 1-inch chunks and put them on a large baking sheet. To see how to safely cut up butternut squash, go to www.jamieoliver.com/how-to.

Peel the apples, then quarter them and remove the core. Peel and roughly chop the onion and add the apples and onion to the baking sheet. Halve and deseed the chiles and add to the sheet with the unpeeled and bashed garlic cloves. Drizzle over a good amount of olive oil and add a good pinch of salt and pepper – I also like to add a pinch of coriander seeds and a little chopped rosemary because I think it brings out the best flavor. Toss everything together so all the veg is nicely coated, season one more time, then whack into the oven and cook for around 45 minutes, or until everything is cooked through, intensely golden and delicious.

Toss the pumpkin seeds with salt, pepper, olive oil and the cayenne. Spread on a baking sheet and roast in the oven for 10 to 15 minutes until nice and toasted, then put aside for later.

Put some of the roasted veg into a blender, making sure you squeeze the garlic flesh out of its skin first. Add a swig of stock, then place a tea towel over the lid and gently blitz until smooth and lovely. Put this into a large pan while you blitz the rest. Pour in most of the cream and bring to a simmer over a medium to low heat. Have a taste, season to perfection and either add another splash of stock, or carry on simmering until you’ve got it to the consistency you love.

To serve, divide between warm soup bowls and add an 80s swirl of cream and a sprinkling of
toasted seeds. If you’re as creative as Leona, you can also grab some flowering herbs or edible
flowers to sprinkle over the top and make it extra beautiful. Serve with warm crusty bread.