Saving Each Other by Victoria Jackson and Ali Guthy 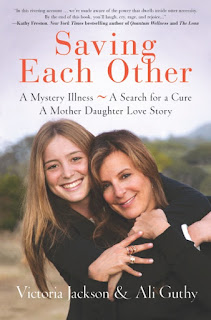 Saving Each Other
by Victoria Jackson and Ali Guthy
Published October 16, 2012
(excerpt from Saving Each Other:  A Mystery Illness, A Search for the Cure, a Mother-Daughter Love Story)
Every Day Is a Miracle

By Victoria Jackson,
Author of Saving Each Other: A Mystery Illness, A Search for the Cure, A Mother-Daughter Love Story
Every day is a miracle. That I do know, even though I forget it sometimes.
Isn't that kind of the point of 2%? It's like by throwing a rare light show or random nightmare storm in our direction, the universe is just trying to get our attention so we don't take anything for granted and just appreciate our days and the hours and minutes that make them up.
That's what's on my mind as I talk to a mom who has just lost her son, my daugher Ali's age, to Neuromyeltis Optica (NMO). She sounds so strong. For all these years I've been waging war with the image of Ali having to be wheeled across the stage at her graduation, maybe not even getting there. Maybe that's why I'm looking for ways to delay the ceremony. And here is a mother whose son didn't make it. Not only that, incredibly, she's calling not to talk about her loss but to thank us for the work of the foundation that gave him longer than they had expected. She lets me know that friends and family have sent in donations for our Guthy-Jackson Charitable Foundation to be used in his memory. Her voice is clear and resolute as she tells me to call on her for anything she can do to help raise awareness in the ongoing search for a cure.
When I get off the phone, sad and mad that we couldn't do more, I fight a flood of fearful thoughts and just try to be in the moment to appreciate where we are. The truth is that every worst fear that I could and did imagine for Ali -- none of it has happened. The dire prognosis that we were given hasn't come to pass.
It's true that I have lived too often with the subliminal concern that special events and usual rites of passage may be her last. The irony, of course, is that she prefers low key. But my impulse was always to give all the kids happy memories and make all the details so memorable that they'll be able to relish them long into the years to come.
Even thinking that there could be a cap on the years to come for Ali is so sacrilegious, not even something I allow myself to think about, that I compensate by making every milestone the ultimate.
Senior prom, of course, had to be the absolute best in the world because (a) it's prom, (b) there might not be another event like it and (c) I never went to prom and refuse to let her miss out on anything that life has to offer.
The logic and the love were really uppermost in my mind. But then again, finding the most amazing dress and then having it altered -- I went a little crazy, almost going so far as to tell the tailor that it has to be perfect because only God knew how much time she had left.
Evan once told me that you have to try to just have faith in the world. That's the lullaby I kept trying to sing to myself now. He has always said that to me. Still, I looked around at other moms at the pre-prom party and realized that probably no other mother was thinking of her daughter in her very special dress the same way I was thinking of Ali.


This piece is excerpted from "Saving Each Other: A Mother-Daughter Love Story" by Victoria Jackson and Ali Guthy. Available from Vanguard Press, a member of the Perseus Books Group. Copyright 2012

Copyright © 2012 Victoria Jackson and Ali Guthy, authors of Saving Each Other: A Mystery Illness, A Search for the Cure, A Mother-Daughter Love Story

Ellen DeGeneres recently interviewed Victoria Jackson and her daughter Ali.  Here's a link for your viewing:  http://www.ellentv.com/videos/0-ujfdv7uf/
----------
Come back soon for my review including a giveaway to one lucky winner.  Sorry, US Residents only.