A Wilderness of Error by Errol Morris 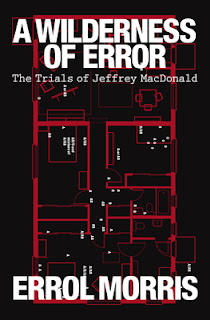 Source:  Many thanks to TLC Book Tours and the publisher for providing a complimentary copy of A Wilderness of Error.  Receipt of this novel doesn't influence my opinion nor this review.  The opinion expressed here is my own.

Academy Award-winning filmmaker and former private detective Errol Morris examines the nature of evidence and proof in the infamous Jeffrey MacDonald murder case
Early on the morning of February 17, 1970, in Fort Bragg, North Carolina, Jeffrey MacDonald, a Green Beret doctor, called the police for help.  When the officers arrived at his home they found the bloody and battered bodies of MacDonald’s pregnant wife and two young daughters. The word “pig” was written in blood on the headboard in the master bedroom. As MacDonald was being loaded into the ambulance, he accused a band of drug-crazed hippies of the crime.
So began one of the most notorious and mysterious murder cases of the twentieth century. Jeffrey MacDonald was finally convicted in 1979 and remains in prison today. Since then a number of bestselling books—including Joe McGinniss’s Fatal Vision and Janet Malcolm’s The Journalist and the Murderer—and a blockbuster television miniseries have told their versions of the MacDonald case and what it all means.
Errol Morris has been investigating the MacDonald case for over twenty years. A Wilderness of Error is the culmination of his efforts. It is a shocking book, because it shows us that almost everything we have been told about the case is deeply unreliable, and crucial elements of the case against MacDonald simply are not true. It is a masterful reinvention of the true-crime thriller, a book that pierces the haze of myth surrounding these murders with the sort of brilliant light that can only be produced by years of dogged and careful investigation and hard, lucid thinking.
By this book’s end, we know several things: that there are two very different narratives we can create about what happened at 544 Castle Drive, and that the one that led to the conviction and imprisonment for life of this man for butchering his wife and two young daughters is almost certainly wrong.  Along the way Morris poses bracing questions about the nature of proof, criminal justice, and the media, showing us how MacDonald has been condemned, not only to prison, but to the stories that have been created around him.
In this profoundly original meditation on truth and justice, Errol Morris reopens one of America’s most famous cases and forces us to confront the unimaginable. Morris has spent his career unsettling our complacent assumptions that we know what we’re looking at, that the stories we tell ourselves are true. This book is his finest and most important achievement to date.
My Review:


I don't read many true crime books, I think this is my second and The Innocent Man by John Grisham was my first.  As far as true crime goes, A Wilderness of Error was a very interesting read.  From descriptions of the crime scene, sketches of the scene, interviews with witnesses and lawyers, A Wilderness of Error entices one to question the integrity of the prosecution that sent MacDonald to jail.  Errol Morris is convinced of his innocence and this true crime book does a good job of portraying the evidence in a manner that leaves the reader agreeing with him.  With the evidence supplied and the testimonies and interviews, Errol Morris presents a plausible case for dismissal of the charges.

"Wherever he steps, wherever he touches, whatever he leaves -- ever:  unconsciously--will serve as a silent witness against him.  Not only his fingerprints and his footprints, but his hair, the fibers from his clothes, the glass he breaks, the tool mark he leaves, the paint he scratches, the blood or semen he deposits or collects.  All of these and more bear mute witness against him.  This is evidence that does not forget.  It is not confused by the excitement of the moment.  It is not absent because human witnesses are.  It is factual evidence.  Physical evidence cannot be wrong.  It cannot perjure itself; it cannot be wholly absent.  Only in its interpretation can there be error.  Only human failure to find, study, and understand it can diminish its value." (page 20)

Physical evidence was abundant; however it is obvious it was incorrectly interpreted.  Items were moved during the initial investigation.  Evidence was walked upon and some destroyed.  Inexperience played a role in this for sure but the problems go deeper.  It would seem the prosecution played a role in inhibiting the defence in having access to evidence.  The defence lawyers were allowed to view some of the evidence as it was boxed up and kept in a jail cell.  Their repeated requests for full disclosure were ignored and then later denied.  What?  How can this be?  Isn't that interference?  Possibly contempt?

And the list grows and grows.  A botched investigation, a biased judge and an uncooperative prosecution team were the start. MacDonald had described one of the four individuals he said were in his home that evening.  A woman with a blonde wig, knee high boots and a floppy hat.  Funnily enough, the military police responding to the scene recalled seeing a woman of that description standing on a corner in the rain as they drove by at around 4am.  She was also spotted in a donut shop with blood on her.  Neighbours saw her arrive early in the morning with a group of others and she was dressed in the same fashion.  She even confessed!  Not in court, of course, but to a police officer for whom she was an informant in drug cases and to others as well.

At this time, many of the witnesses, even the woman, Helena Stoeckly, herself, have died.  Murdered perhaps in the case of Helena Stoeckley.  I was flabbergasted to read of all the obvious clues that were overlooked or brushed under the proverbial carpet.  What happened to justice?  When a man is attacked in his own home with a knife to his lung, collapsing it; other injuries evident and his wife and two daughters are brutally killed how does the law turn this on him?  How does one stab himself in exactly the right spot, so very near to the heart as to be impossible even for a surgeon to do so without error, to collapse a lung but not kill?  How very near MacDonald was to death and the horror of hearing the screams for help from his own children and his wife, the tragedy of it all, the loss of a family; how does one convince him/herself of his guilt?

Errol Morris covers all the bases, in-depth, with evidence to back up his conclusions.  He convinced me.  You'll have to read A Wilderness of Error for yourself to see if you are convinced too.  If you like true crime, enjoy watching crime television shows, fancy yourself as an investigator of truths; you will not be disappointed with Errol Morris' presentation of this case as A Wilderness of Errors.  I certainly wasn't.

Errol Morris is a world-renowned filmmaker—the Academy Award-winning director of The Fog of Warand the recipient of a MacArthur genius award. His other films include Mr. Death, Fast Cheap & Out of Control, A Brief History of Time, and The Thin Blue Line.
Find out more about Errol Morris at his website, and follow him on Twitter.