Pandemonium by Lauren Oliver (2nd in the Delirium Series) 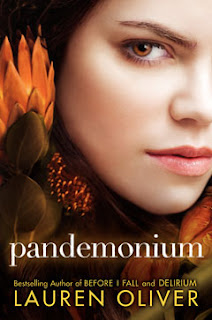 the memory of my nightmare,
pushing aside thoughts of Alex,
pushing aside thoughts of Hana
and my old school,
push,
push,
push,
like Raven taught me to do.
The old life is dead.
But the old Lena is dead too.
I buried her.
I left her beyond a fence,behind a wall of smoke and flame.
Lauren Oliver delivers an electrifying follow-up to her acclaimed New York Timesbestseller, Delirium. This riveting, brilliant novel crackles with the fire of fierce defiance, forbidden romance, and the sparks of a revolution about to ignite."

First off, take a look at this gorgeous cover!!  Stunning autumnal colours, vivid and bright.  A protea or two graces the cover too.  I am so glad this cover was designed from the beginning to complement the special edition cover of Delirium.  Both are breathtaking!
Second, why Pandemonium?
Pandemonium, definition:
1. Wild uproar or unrestrained disorder; tumult or chaos
2. A place or scene of riotous uproar or utter chaos
Are you one of many readers in a state of uproar, waiting to read Pandemonium?  Did you stand in line to get a copy?
Pandemonium is the world in an uproar, as the story of Delirium continues in this second book in the trilogy.  In Delirium we are introduced to a society, a country even, in which love is considered a disease and all must be vaccinated, beginning at the age of 18, against it.  Vaccinating involves lasers, brain surgery...nothing major, right?  Yet, it is the norm.  It is taught in school, in homes, everywhere you look.
In Delirium, Lena discovers some truths about love.  Perhaps everyone is wrong?  What if everyone is wrong?  When she meets Alex, she begins to question all she has learned her entire life.  Things that are so ingrained that they are second nature.  To be together, they must escape but as they do, running for the fence that encloses their community, Alex is shot and captured.  Lena does the only thing she can do, she runs.
The beginning of Pandemonium finds Lena collapsed in the woods, where Raven finds her.  Raven is an infidel.  With her, Lena discovers a new life, a new Lena, a new world...without Alex.  He fills her memories...her dreams...but he is gone and Lena must find a way to go on, to live, to survive.
Pandemonium finds Lena vulnerable, afraid and weak from her injuries.  Time heals her physical wounds and the emotional despair lessens and Lena finds herself acting as a spy.  She is in New York, spying on the son of the DFA leader, pretending to be one of them, acting cured and in favour of the cause to eradicate the disease called love.  But in all this, Lena finds herself in physical and emotional danger... danger of falling in love...again.  Where does this all lead her?  From vulnerable to resistance fighter, from sorrow to hope, and possibly to love.  But then, in the last few paragraphs, a twist is unveiled that leaves the reader hanging.....
The state of Pandemonium is not decreased when the book ends....if anything, it is renewed.  Requiem is a year away.  That's a year to contemplate the books, to think about Lena and Justin and the infidels and.......well, I cannot share more.  It'll spoil the ending for you.  (though, I suspect you will be expecting something of the sort anyway and it leads to a whole new entanglement as Pandemonium leaves off where Requiem will begin again.  Can you wait for it?  It'll be difficult.....I know you are going to look up the definition for requiem now, aren't you?)
Pandemonium takes on a different feel as the story of Delirium changes.  Lena changes and the movement to stop treatment against love grows stronger and more urgent.  Pandemonium sees Lena become a resistance fighter.  She is so caught up in the urgency and action that the little changes go undecipherable, at least at first.  Many will read this book and wonder how she can do what she does.  Is it betrayal?  Under these extraordinary circumstances, do you think it is a likely conclusion?  If you've read Pandemonium, please share your thoughts on this with me.  I know some readers didn't like the path Pandemonium took, didn't like Lena's choices, were even upset over the storyline.  Are you one?
All in all, Pandemonium is well-written.  It evokes emotions and some heated conversations.  It calls several things into question.  In other words, Pandemonium does just that...it evokes Pandemonium!
Well done, Lauren Oliver!!
*I borrowed Pandemonium from a friend who was dying to read the book...it was all she could talk about for months!!