A while ago, rather quite a long time now, I began a new idea here on My Bookshelf.  It was A Stranger's Choice.  Today I am revisiting this in kind.  Not quite the same but similar.  Well, you'll see.
On Friday I was assisting a customer in the book store and she was purchasing Jeffrey Archer's Only Time Will Tell and we got to talking about the author.  She simply adores his writing and mentioned a few of his works that she has enjoyed.  I was happy to inform her that Only Time Will Tell is the first in a new series of Mr. Archer's, the Clifton Chronicles.  As we discussed a bit further, she made a recommendation to me.  She said I simply must read Not a Penny More, Not a Penny Less by Jeffrey Archer.
Curiosity peaked, I did a little investigating and this is what I discovered:

First published in hardback in 1976 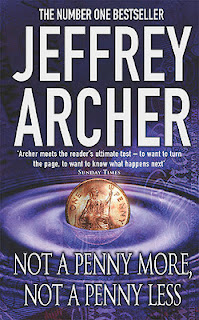 The conned: an Oxford don, a revered society physician, a chic French art dealer, and a charming English lord. They have one thing in common. Overnight, each novice investor lost his life's fortune to one man. The con: Harvey Metcalfe. A brilliant, self-made guru of deceit. A very dangerous individual. And now, a hunted man.
With nothing left to lose four strangers are about to come together -- each expert in their own field. Their plan: find Harvey, shadow him, trap him, and penny-for-penny, destroy him. From the luxurious casinos of Monte Carlo to the high-stakes windows at Ascot to the bustling streets of Wall Street to fashionable London galleries, their own ingenious game has begun. It's called revenge -- and they were taught by a master.
Interesting fact:
It took Jeffrey some time to find a publisher for this first novel. When it was published, it only sold 3,000 copies in hardback. The paperback did a bit better, selling about 20,000 in the first year. However, as word-of-mouth took over, demand increased. Not a Penny More, Not a Penny Less has now been reprinted 57 times.

~ from the author's site http://www.jeffreyarcher.co.uk/site/node/26.  You may read an excerpt on Jeffrey Archer's site.
Sounds fascinating, rather like a James Bond film...just a little!
Posted by Shirley at 12:32 PM

Email ThisBlogThis!Share to TwitterShare to FacebookShare to Pinterest
Labels: A Stranger Recommends, A Stranger's Choice, Jeffrey Archer, Not a Penny More Not a Penny Less, Only Time Will Tell