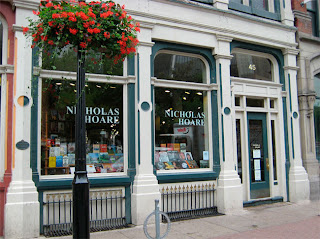 Though I've never had the privilege of visiting Nicholas Hoare's bookstores, I was saddened to read of the upcoming closure of the last of his fine stores.

Nicholas Hoare has become somewhat of a legend in the bookstore industry, known widely for his brilliant video reviews, see below, presented in a smoking jacket or suit with a bow tie.  There must be some British in him!

Indeed there is.  Nicholas Hoare comes from a family banking background in Britain and is the only one of his family members to settle in the "colonies," as his site states.  With the Toronto store, his flagship store, slated to close in early April 2013, Nicholas Hoare feels his time for retirement has arrived and he will retire in style on an expansive estate in the maritimes.  It's gorgeous folks, and I can't blame him.

During his "reign," Nicholas Hoare has brought to Canada a great deal of British literature in addition to the popular; always maintaining his ties to the UK, sharing its beauty of land and culture with our country.  His stores, three I believe in total, were refined destinations, with handcrafted wood fixtures and mouldings.  Facings of books greeted the customers, beckoning perusal.

Yes, Nicholas Hoare the bookstore will be missed by its many customers and staff and the man, himself, a wizened lover of literature who loved to share the same with all.  Take a moment now, won't you, and watch the video embedded below of one of his many video book reviews.  I love this man's style!!


And so it is with a fond advance farewell, customers and strangers bid adieu to the man in the bowtie and suit and to his legacy of Nicholas Hoare Bookstores.  Good night.
Posted by Shirley at 12:26 PM