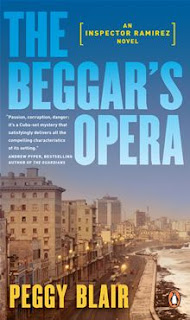 Source:  A complimentary copy was provided by the publisher in exchange for an honest and unbiased review.

The first volume in the atmospheric and suspenseful Inspector Ramirez series


In beautiful, crumbling Old Havana, Canadian detective Mike Ellis hopes the sun and sand will help save his troubled marriage. He doesn’t yet know that it’s dead in the water—much like the little Cuban boy last seen begging the Canadian couple for a few pesos on the world famous Malecon. For Inspector Ricardo Ramirez, head of the Major Crimes Unit of the Cuban National Revolutionary Police, finding his prime suspect isn’t a problem—Cuban law is. He has only seventy-two hours to secure an indictment and prevent a vicious killer from leaving the island. But Ramirez also has his own troubles to worry about. He’s dying of the same dementia that killed his grandmother, an incurable disease that makes him see the ghosts of victims of unsolved murders. As he races against time, the dead haunt his every step …


The Beggar's Opera is an opera written in three acts by John Gay in 1728.  It is about political corruption, well-mannered ladies of the evening, men in disguise as women, beggars and prisoners.  It is a story of revenge and violence, falsehoods and an impending possible execution.  (paraphrased from page 339)  It is an opera about love, friendship and loyalty.  And it was playing that week in Old Havana, Cuba.  Inspector Ramirez planned to take his wife after what had been a most trying of weeks, oddly very much like the opera.

When a young boy's body is spotted near the shore in Old Havana, it becomes obvious that the tourist town hides dirty secrets just out of site of the visitor.  Upon further investigation, it is obvious to Inspector Ricardo Ramirez that a most sinister person or persons is guilty of the crime and he stops at nothing to reveal the culprit.  He and his ghost friends, that is.  What he unveils surprises no one more than himself.

Peggy Blair has written a disturbing tale in this version of The Beggar's Opera.  Disturbing in the violent nature of the crimes against young boys in a tourist town in Cuba.  Using her vast knowledge of the criminal system, a passion for uncovering truths, and turning a tale 360 degrees; Blair has created a well-written modern version of the centuries old opera.

There are so many twists and turns in this mystery that I wondered if the author couldn't have made another book or two from the sub-plot lines here.  The last few chapters left me reeling with the truths they revealed.   The Beggar's Opera is the first in the Inspector Ramirez novels, and I have to wonder, what does Blair have in store for her future Ramirez mysteries and what plot twists does this incredibly sharp author plan to pronounce upon her unsuspecting readers?  Whatever they are, they'll be sure to shock!


Thanks to Penguin, you can read Chapter One here: http://www.penguin.ca/static/pdf/previews/beggars-opera-ch1.pdf

Peggy Blair is a Canadian author, lawyer of over 30 years, and realtor living in Ontario, Canada.  She is a former crown prosecutor and a long-time criminal defence lawyer.  The Beggar's Opera is her debut crime novel, the first Inspector Ramirez novel in a new series.  The second in the series, The Poisoned Pawn, will be available in Canada February 2013.
Posted by Shirley at 5:48 PM