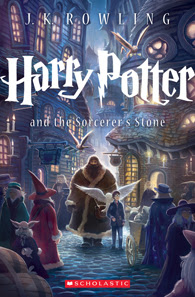 It's all over Twitter!  Scholastic Publishing will be releasing new covers on each of the Harry Potter novels to commemorate the 15th anniversary!

Each title will be bound in covers illustrated by artist Kazu Kabuishi, illustrator of the graphic novel series Amulet.  Each cover will depict a scene from that particular novel.  According to Ellie Berger of Scholastic Trade Publishing, the new covers will be found on trade paperback editions only.  For tweens who've grown up watching the Harry Potter movies, it is expected and hoped that the new covers will entice a new readership. Hard covers and mass market editions of the Harry Potter series will maintain the original art as illustrated by Mary GrandPre.

New editions of Harry Potter will be released in the states September 2013. Scholastic also announced that it will release the first ever box set of the complete Hogwarts Library (Quidditch Through the Ages, Fantastic Beasts and Where to Find Them, and Tales of Beedle the Bard) in November 2013.  Proceeds from The Hogwarts Library Collection sales will support two charities dear to J.K. Rowling: Lumos, whose goal is to end the institutionalization of children (founded by Rowling), and Comic Relief, a charity with the goal of ending world poverty.