Giveaway with Guest Author: Carrie Crain author of The Adventures of Austin Girl: The Legend of Diablo

Austin Girl, the story’s heroine, is adorable, smart and feisty. She is thirteen going on twenty and she is thrown into a dystopian world where disco rules and the air reeks of polyester.

I don’t think your title is long enough *laugh*
CC: I wanted to make it longer by adding the words, “magic” and “sword” LOL

Do you have some underlying angst with Disco?
CC: Yes! It’s called polyester and Leif Garrett. Bwahahah

There are many cats or cat-like people in this novel, what’s up with your obsession with felines?
CC: I grew up in the country with cats. There were always stray cats giving birth to kittens in our garage. I used to have nightmares that these cats would turn half human and hiss and make me eat my veggies and do my homework. * I was in 3rd grade.

Cat-obsessed Carrie is sharing her FUN FACTS from novel: 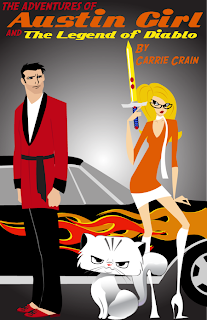 Make sure you stick around and comment. Follow @CarrieCrain and @LegendofDiablo for double the chances. We’ll be giving away a copy of THE ADVENTURES OF AUSTIN GIRL AND THE LEGEND OF DIABLO either in paperback or e-book (winner’s choice).

Want to purchase Carrie’s novel, The Adventures of Austin Girl and the Legend of Diablo? Here are the buy links:

Due to lack of interest, this contest has been cancelled.  Sorry for the inconvenience.  Please come by in the new year for more exciting contests!

Email ThisBlogThis!Share to TwitterShare to FacebookShare to Pinterest
Labels: Author Guest Post, Carrie Crain, The Adventures of Austin Girl: The Legend of Diablo