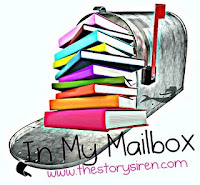 In My Mailbox (IMM) is hosted by The Story Siren.  This is a weekly bookish meme wherein we show what we have received by mail, borrowed, or purchased and allows me personally to keep track of my TBR pile!
This week in the mail were these wonderful books:

The Fruit of the Dendragon Tree by Paul H. Deepan      (from the cover) Seventeen-year-old Jake Patel’s mother is dying of cancer. Jake is furious at his father David for accepting this fact, and bargains with the universe to save his mother’s life, no matter who has to die.Assisted by his schoolmate Jenny Blackwood, a well-intentioned but inexperienced witch, Jake is transported to the world of Tiramonde, a world that, like himself, is on the brink of catastrophe.
Guided upon his arrival by the witch Ureth, Jake learns that the only thing that can save his mother’s life is the fruit of the Dendragon Tree, a tree that has not bloomed in living memory. But legend holds that plucking the Dendragon fruit will release the dragon Kildraig from his thousand-year imprisonment, and Kildraig was imprisoned for very good reasons. Worse, when David also arrives in Tiramonde, looking for his son, both Ureth’s and Jake’s choices become excruciating. For Ureth must choose the true liberator of Tiramonde. And Jake must choose which parent, in the end, he will save.
Vibrant with magic, and alive with centaurs, elves, werewolves and vampires (not to mention a deliciously evil dragon), The Fruit of the Dendragon Tree speaks to our fear of inevitable death, and to our hope for continued life. It is a story of premature loss and repaired love, of learning that there are worse things than dying, and that cancers, both real and metaphorical, often require poisons to defeat them.
This book is a complimentary copy sent to me by the author for an unbiased review.

Rock Bottom by Erin Brockovich with C.J. Lyons.  (from the cover)  Ten years ago, a pregnant seventeen-year-old, Angela Joy Palladino, fled her hometown, Scotia, West Virginia, as a pariah. Over time, AJ succeeded in establishing herself as an environmental activist, dubbed “The People’s Champion,” only to be forced to retreat from the spotlight in the wake of a crushing media disaster.
When AJ is offered a job with a lawyer who is crusading against mountaintop removal mining, she is torn. As a single mother of a special needs nine-year-old boy, AJ can use any work she can get. But doing so will mean returning to the West Virginia hometown she left in disgrace so long ago.
Upon arriving in Scotia, AJ learns of the sudden death of the lawyer who hired her. Soon after joining forces with his daughter, Elizabeth, threats begin to surface, bodies begin to pile up, and AJ discovers that her own secrets aren’t the only ones her mountain hometown has kept buried. Hitting rock bottom, AJ must face the betrayal of those once closest to her and confront the harrowing past she thought she had left behind.”  (I received this book from FSB Media for review purposes.  I will not receive anything in return for my honest and unbiased review.)

Alzheimer's Killing Me Unknowlingly:  Jane's Story by Jana Pryor.  (from the cover)  Alzheimer’s disease is the sixth leading cause of death in the United States affecting over 5 million lives.
Alzheimer’s is a disease that slowly consumes an individual’s brain and causes a major impact on the mind. The medical definition of mind is “that which thinks, reasons, perceives, wills and feels.” In neuroscience, there is no duality between the mind and the body; they are one. The mind appears in no way separate from the brain. If this is true, people who suffer from Alzheimer’s may as well be considered “the walking dead” - they just don’t realize it.
It is the desire of the author to shine light on how Alzheimer’s ruthlessly affects behavior by taking readers through the different stages of her grandmother’s battle with the disease. Alzheimer’s disease is an abnormal way for an individual to age. It is fatal, and it consists of much more than just memory loss to the elderly. Jane’s story will give readers insight into what really happens in the world of an Alzheimer’s patient.
This is a complimentary copy provided by the author in exchange for an unbiased review.

Sealing the Deal by Diana Kirschner, Ph.D.  (from the cover)  Love Mentor Dr. Diana offers revolutionary advice for finding-and keeping-the one you love:
I won Sealing the Deal from Sidne at Reading Rendezvous Reviewz.

What's in your mailbox this week?  I'd love to know.  Just leave a link to your post or your answer in the comment section.  Remember to link with The Story Siren too!
Posted by Shirley at 5:28 PM

Email ThisBlogThis!Share to TwitterShare to FacebookShare to Pinterest
Labels: In My Mailbox