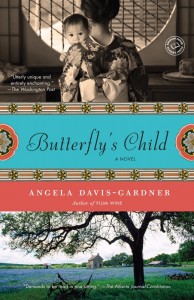 Butterfly's Child
Author:  Angela Davis-Gardner
Publisher:  Dial Press Trade Paperback
Published:  April 10, 2012
Pages:  384
ISBN 9780385340953
Includes Synopsis of Puccini's Opera Madama Butterfly, Author's Note (with background information), A Reader's Guide and Questions and Topics for Discussion
Source:  Thank you to TLC and the publisher for a complimentary copy of Butterfly's Child.  This review is my own opinion and was not influenced be receipt of a complimentary copy of this book.


When three-year-old Benji is plucked from the security of his home in Nagasaki to live with his American father, Lt. Benjamin Franklin Pinkerton, and stepmother, Kate, on their farm in Illinois, the family conceals Benji’s true identity as a child born from a liaison between an officer and a geisha, and instead tells everyone that he is an orphan.
Frank struggles to keep the farm going while coping with his guilt and longing for the deceased Butterfly. Deeply devout Kate is torn between her Christian principles and her resentment of raising another woman’s child. And Benji’s life as an outcast—neither fully American nor fully Japanese—forces him to forge an identity far from the life he has known.
When the truth about Benji surfaces, it will splinter this family’s fragile dynamic, sending repercussions spiraling through their close-knit rural community and sending Benji on the journey of a lifetime from Illinois to the Japanese settlements in Denver and San Francisco, then across the ocean to Nagasaki, where he will uncover the truth about his mother’s tragic death.
A sweeping portrait of a changing American landscape at the end of the nineteenth century, and of a Japanese culture irrevocably altered by foreign influence, Butterfly’s Child explores people in transition—from old worlds to new customs, heart’s desires to vivid realities—in an epic tale that plays out as both a conclusion to and an inspiration for one of the most famous love stories ever told.
My Review:
Madama Butterfly is a world-famous opera which found its origins in The Century magazine in 1898 as a story written by John Luther Long. From there it was written as a play where it was viewed by Pucchini who went home immediately after seeing the performance and began composing music for what would become the opera.  From these historical beginnings, Butterfly's Child finds its origins.


For those who haven't had the opportunity to see Madame Butterfly, myself included, the author Angela Davis-Gardner provides a brief summary of each act at the beginning of the book.  Angela takes the story of Benji beyond the 'finale' of the opera to Benji's life in America where his father, Frank Pinkerton, and step-mother, Kate, raise him as an "adopted" son.  For an American/Japanese child, America is so foreign as to be cruel.  He has blond hair and blue eyes but otherwise looks like his Geisha mother.  He is neither American nor Japanese and yet he is both.  Cruelly teased at school, Benji learns to defend himself as his "samurai" ancestors would have done.


Frank Pinkerton is certainly not the ideal candidate for a husband nor father and his vices continually play havoc upon his marriage, his family, and the farm.  Why he was "loved" by Cio Cio, Benji's mother, and Kate, continues to baffle me.  Pinkerton's influence upon Benji is cruel at times, leaving Benji yearning for the land he considers home.  When Benji reaches the age of 15, he leaves home to go to his native Japan to find his mother's family where he is sure he will fit in.  He learns some hard lessons along the way and has to grow up quickly.  Fortunately for Benji, he has had some positive influences in his formative years including his Grandmother, his teacher, and the veterinarian Keast, who treats him as a true son.  He is "adopted" by a Japanese import/exporter whose life he saves one day, thus introducing him to the business of importing and exporting.


Once overseas, Benji takes up the search for his mother's family, gains employment in a similar business as his adoptive father, and learns more about himself as a man.  It is here, in the "third act" that Benji's life seems successful.  He meets a girl and falls in love, starts his own business and a family.  In the finale, he discovers some truths that are an amazing twist to the story.  Oddly, though, the author seems to rush the ending, leaving me a little less than satisfied with how everything ties up.


Angela Davis-Gardner is a master at character development.   Each person comes to life on the pages, so clearly it is as if you know them personally.  Some are utterly unlikeable while others make you smile to know them.  She has painstakingly researched history and the country of Japan which is evident throughout the book.


Butterfly's Child is well-written and is suitable for a mature audience.  It is a novel of love, lust, desire, hope, tragedy, strength, and sorrow.  Butterfly's Child will touch you and make you ponder, leaving you yearning now to see the celebrated opera Madame Butterfly. 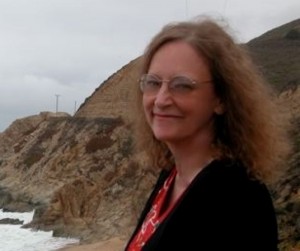 
Angela Davis-Gardner is the author of the internationally acclaimed novels Felice, Forms of Shelter, and Plum Wine, which was inspired by the time she spent teaching Tsuda College in Tokyo, Japan. An Alumni Distinguished Professor at North Carolina State University in Raleigh, Angela has won nearly thirty awards for writing and teaching. She lives in Raleigh, North Carolina, where she is at work on her next novel.