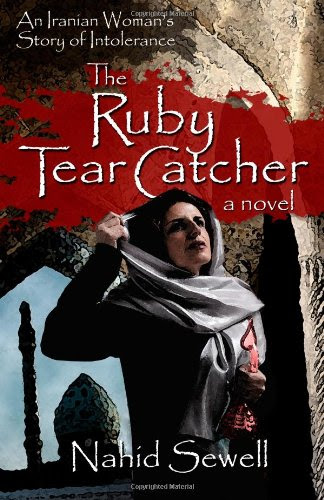 
Synopsis from the website:  "A story of triumph and hope in the face of fanaticism and intolerance, Leila’s tale echoes events that shaped the lives of people in Iran. At its heart, her message is the interconnected oneness of all people, the belief that despite religious and cultural differences, we are all the same. A poignant portrait of Iran, it’s a story of sadness and joy, unveiling the human emotions behind historical events."
My Review:  When I read the synopsis for The Ruby Tear Catcher by Nahid Sewell, I was intrigued.  It is true that I first remembered the movie "Not Without My Daughter" and the wars and violence that we see on the news.  I recalled the less favourable I'd heard and read.  The Ruby Tear Catcher reveals a different world from what we envision. Nahid Sewell portrays a magnificent vista of fruit trees, lakes, beautiful homes....a country of beauty.  Before the regime and the fall of the Shah, life was good for many.  Those who followed the teachings of the Koran lived a life defined by their religion but this was not forced upon the country.  That was then....
Nahid Sewell's novel, The Ruby Tear Catcher, is based upon a composite character, Leila, who grew up in Iran before the fall of the Shah.  Her life is good and she enjoys certain freedoms.  As she grows older, however, she becomes aware of the differences of the sexes and of privileges for males which bothers her and she begins to form the opinion that life is not fair under Islam, especially not for women.  When the war of Iran and Iraq takes the life of her brother, whom she has long considered her confidante and protector, Leila's father begins to speak out and teach in school against the regime of Khomeini.  His actions and beliefs come to the attention of those who seek the downfall of the Shah; people you don't want to upset.  An anonymous message on the family's phone reveals their lives are in danger so hurried preparations are made for Leila's parents to flee the country.  Their freedom becomes Leila's imprisonment as shortly thereafter she is forcibly kidnapped and thrown into the worst prison in the country where she is beaten and molested for six months, in an effort to force her to reveal her father's location.  Few people survive such a place.
The Ruby Tear Catcher is an eye-opening experience, one that many should read to understand the plight of the people of Iran.  Nahid Sewell wants us, the readers, to know that not all are extremists.

"I hope to help people see that we are all children of God, equally deserving of respect and dignity regardless of race, religion, or gender. Finally, I'd like to give hope to my sisters in the Middle East, the women in Iran, Afghanistan, Pakistan, Iraq, or other places who suffer under cultural and religious traditions that see them as second class, who are not treated with respect and care. There is love for them in our hearts." ~ Nahid Sewell

Many have suffered at the hands of the leaders of their country.  The writer, herself, cannot ever go home again because of this book.  I recommend you read it.  Before we judge a nation, a religion, a people, we need to know a little more and understand a little better.  The Ruby Tear Catcher is a step in that direction.

Nahid Sewell was born in Tehran, Iran, before the Islamic Revolution. After finishing high school, she came to the United States, where she obtained a B.A. and M.B.A. from Lehigh University. Nahid began a successful career in Information Technology. While holding full-time positions and raising a family, she began writing articles and was a frequent conference speaker. Her first non-fiction book was a best-seller and she followed with three additional non-fiction books. Nahid has written hundreds of articles, eight of which were featured on magazine covers. She has served as a columnist for two magazines and earned a writing award for an article published in 2007. Nahid is also an award-winning speaker.
While establishing herself as a successful author and Information Technology executive, Nahid married an American man and has two sons. Her husband, who lived for twenty years in a Christian community, provided much of the context for Christian fundamentalism in this, her debut novel. Together, their life’s experiences provide color and add authenticity to this fictional story of an Iranian woman’s struggle for freedom in the face of fundamentalism. Their shared vision of a world where men and women of all colors and cultures, all races and religions, recognize their interconnected oneness gave life to this book.
Nahid is fluent in English, Farsi and French and has traveled to Iran with her family on many occasions, where she experienced and observed first-hand the turmoil and transition she writes about. She enjoys traveling, gourmet cooking, and exercise in her spare time. (courtesy of http://therubytearcatcher.com)
Posted by Shirley at 7:36 PM