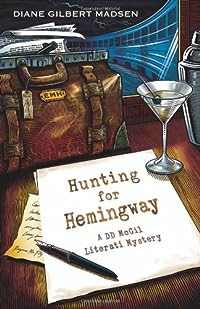 Hunting for Hemingway a DD McGil Literati Mystery
Author:  Diane Gilbert Madsen
Copyright:  2010
Publisher:  Midnight Ink, A Division of Llewellyn Worldwide Inc.
Pages:  278
Trade Paperback
Contains:  Prologue, Author's Afterward, Hunting for Hemingway Bibliography, Recipe for Hemingway's Daiquiri, the first chapter of The Conan Doyle Notes
ISBN 978-0-7387-1953-5
Available on Amazon, also available as an Ebook
Author's website:  http://dianegilbertmadsen.com/
Source:  Lissy Peace & Associates LTD. (publicity, public relations, promotions) provided a complimentary copy in exchange for an unbiased and honest review.  I was not compensated for this review.
Release:  "DD McGil delves into the mystery of what could happen if Ernest Hemingway's lost manuscripts were found.  What would they be worth?  Are they worth murder?
Diane Gilbert Madsen's exciting new novel, Hunting for Hemingway, the second in the DD McGil Literati Mystery series poses the question what would happen if Ernest Hemingway's long lost manuscripts were found?  In 1922, when Hemingway's wife traveled from Paris to meet him in Switzerland, a valise containing all of Hemingway's earliest unpublished writings was stolen from her compartment at the train station.  These manuscripts, missing nearly 90 years, would now have incalculable literary and monetary value......
Employing her usual unconventional methods, DD tries to save herself form jail time, find the missing manuscripts for client American Insurance, and track down a murderer.  As DD works her way through a maze of academic in-fighting, more murders ensue; and everyone for the Hemingway Trust to the City College scrambles to find the Hemingway manuscripts."
My Review:  Hunting for Hemingway is an exciting literary page turner riddled with intrigue, history, mystery and murder.  I could hardly put this book down!  From page one, author Diane Gilbert Madsen grabs your attention and keeps it as she reveals piece after piece on the intricate plot.  Ms. Madsen's meticulous research is evident in Hunting for Hemingway.
DD McGil is an insurance investigator who is hired to ascertain the location and validity of the claim that the Hemingway transcripts have been found.  Unfortunately for DD, she is on the scene of two subsequent murders and considered a suspect.  But that is the least of her problems when she discovers she is likely on the same hit list!
Well written, engaging and interesting, Hunting for Hemingway author Diane Gilbert Madsen puts a literary twist from the past to magnificent advantage in this edge of the seat novel.  Hunting for Hemingway can be read on its own without issue, though it is the second in the DD McGil mystery series.  Highly recommended for mystery lovers and literary academics alike, Diane Gilbert Madsen is now one of my favourite mystery authors.   I must read the first book, A Cadger's Curse and look forward to the next in the series.
The first book in the series is A Cadger's Curse - The Robert Burns Secret.  Coming Soon:  The Conan Doyle Notes:  The Secret of Jack the Ripper.
Rated 5/5  Content advisory:  mild sexual references and minor profanity
<iframe width="560" height="349" src="http://www.youtube.com/embed/hb3v3DfyXjg" frameborder="0" allowfullscreen>iframe>

About the author:  Diane Gilbert Madsen grew up enjoying Sherlock Holmes, Agatha Christie, Dorothy Sayers, and John Dickson Carr.  Born and raised in Chicago, Diane attended the University of Chicago and received an MA in 17th century literature from Roosevelt University.  A political who's who, Diane has worked in Illinois government positions from deputy village clerk of Hemingway's hometown to the prestigious position of Director of Economic Development for the State of Illinois, running the Department of Tourism and the Illinois Film Office among others.  She has been cited in both the World Who's Who of Women and Who's Who in Finance and Industry.  She and her husband currently share their home with their two Japanese Chin dogs, Sugar and Spice, on the Cape Haze Peninsula in Southwest Florida.
Posted by Shirley at 5:47 PM