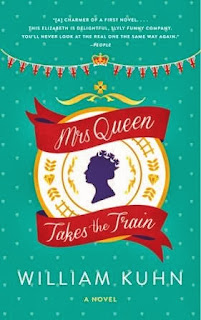 
Mrs Queen Takes the Train is now available in trade paperback, the cover for which is depicted in the above photo.

After decades of service and years of watching her family’s troubles splashed across the tabloids, Britain’s Queen is beginning to feel her age. An unexpected opportunity offers her relief: an impromptu visit to a place that holds happy memories—the former royal yacht, Britannia, now moored near Edinburgh. Hidden beneath a skull-emblazoned hoodie, the limber Elizabeth (thank goodness for yoga) walks out of Buckingham Palace and heads for King’s Cross to catch a train to Scotland. But a colorful cast of royal attendants has discovered her missing. In uneasy alliance a lady-in-waiting, a butler, an equerry, a girl from the stables, a dresser, and a clerk from the shop that supplies Her Majesty’s cheese set out to bring her back before her absence becomes a national scandal.
Comic and poignant, fast-paced and clever, Mrs Queen Takes the Train tweaks the pomp of the monarchy, going beneath its rigid formality to reveal the human heart of the woman at its centre.
My Thoughts:
Mrs. Queen Takes the Train is a thoroughly engaging read that will find appeal with fans of Downton Abbey, Alexander McCall Smith (The No. 1 Ladies Detective Agency and more), JK Rowling and Royal watchers alike.

Kuhn, a well-known biographer and historian, takes his first novel to the land of the British Monarchy where we are introduced to the servants and to her Majesty and to their lives and roles within the Buckingham Palace.

The Queen, we find, is not quite herself of late, in fact she feels herself to be rather in a depressed state.  It is ten years following the death of Princess Diana and she has just seen the passing of her mother and sister.  Alas, the world is changing before her very eyes and she is struggling to find her way as the Monarch and as her own person.

She is surrounded by loyal servants, Shirley (her dress-maid), Lady Anne (lady in waiting), William (butler), Luke  (Major Thomason), and Rebecca (stable-hand) who do her bidding, protect her, and care for her physically and personally.  This is their story as much as it is the Queen's for it is when the Queen decides to "sample the public train, have a look at Britannia, and take a bite of that cheese from Paxton & Whitfield" and disappears from the castle grounds without so much as a word to anyone that they all come into action.

Each of these servants takes it upon themselves to find her and as their journey to do so progresses, they find a kinship among themselves that they may never have had the opportunity to otherwise.  Here we witness some tender touching moments and some very raw emotions that enlivens their character to the reader to the point of us, as readers, feeling a kinship with them.

On the other end of the story, the Queen, wearing Rebecca's hoodie (at Rebecca's insistence as the weather has turned to sleet and the Queen had not come to the stable prepared for the weather), merges with common society and experiences the world as the public does on a daily basis.  She befriends a couple on a train, speaks with the homeless, makes a lasting friendship with a young man from Paxton & Whitfield whom she nicknames "Cheddar", and learns what it takes to truly make contact with people.  It's the flip side of the royal currency to be sure and it's apparent she finds some freedoms  in the act.

Mrs. Queen Takes the Train tackles such things as depression, status, roles, expectations and relationships, as well you might expect considering it is the Queen we are reading about, but Kuhn develops his characters so masterfully that it flows naturally and the reader enjoys the entirety of the fiction mixed with history and fact and before you know it it is done and you close the book with a smile of satisfaction at having just read one of the quaintest and memorable pieces of fiction of the year.

William Kuhn is a biographer and historian, and the author of Reading Jackie, Democratic Royalism, Henry & Mary Ponsonby, and The Politics of Pleasure. He lives in Boston, Massachusetts. This is his first novel. His next book, a work of historical fiction, explores the friendship over nearly forty years of Isabella Stewart Gardner and John Singer Sargent.
Find out more about William at his website, connect with him on Facebook, and follow him on Twitter.