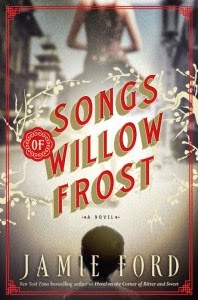 Songs of Willow Frost
Author:  Jamie Ford
Published:  September 2013
Publisher: Ballantine Books
Pages:  352
Genre:  General Fiction, historical fiction
Source:  a complimentary copy was provided by TLC Book Tours and the publisher in exchange for an honest and unbiased review.  Receipt thereof bears no influence on this review.
From Jamie Ford, the New York Times bestselling author of the beloved Hotel on the Corner of Bitter and Sweet, comes a much-anticipated second novel. Set against the backdrop of Depression-era Seattle, Songs of Willow Frost is a powerful tale of two souls—a boy with dreams for his future and a woman escaping her haunted past—both seeking love, hope, and forgiveness.
Twelve-year-old William Eng, a Chinese American boy, has lived at Seattle’s Sacred Heart Orphanage ever since his mother’s listless body was carried away from their small apartment five years ago. On his birthday—or rather, the day the nuns designate as his birthday—William and the other orphans are taken to the historical Moore Theatre, where William glimpses an actress on the silver screen who goes by the name of Willow Frost. Struck by her features, William is convinced that the movie star is his mother, Liu Song.
Determined to find Willow and prove that his mother is still alive, William escapes from Sacred Heart with his friend Charlotte. The pair navigate the streets of Seattle, where they must not only survive but confront the mysteries of William’s past and his connection to the exotic film star. The story of Willow Frost, however, is far more complicated than the Hollywood fantasy William sees onscreen.
Shifting between the Great Depression and the 1920s, Songs of Willow Frost takes readers on an emotional journey of discovery. Jamie Ford’s sweeping novel will resonate with anyone who has ever longed for the comforts of family and a place to call home.

I haven't yet read The Hotel on the Corner of Bitter and Sweet but I have had a few people strongly recommend it to me so when I saw this novel by the same author, I just had to say yes to reviewing it. I was really hoping to find a gem in Ford's writing.


Songs of Willow Frost is set in Seattle during the depression era where young William is the only "yellow" child who resides at Sacred Heart orphanage.  His best friends are Charlotte, a pretty blind girl, and Sunny, a native American.  Most of the children living there were either dropped off by parents who could no longer provide the means to support a child or they are orphans.  William believes he too is an orphan until his twelfth birthday.

On his birthday, which coincidentally is the same birthday as all the other boys in the orphanage (to make things simpler for the nuns), the children are taken to town to see a motion picture.  William sits with Charlotte, describing the movie to her, when a young actress captures his attention.  Her face, her voice, everything about her reminds him of his mother.  But that can't be because he was told she was dead.  Yet he has memories of her and he feels this actress, Willow Frost, may be his mother.

William later escapes from the orphanage with Charlotte and returns to the theatre where he again sees her and then he knows.  However, this brings up some deep issues and pain because the mother he remembers loved him dearly.  Why would she not come for him?  Why did no one tell him she was alive?

Alternately through Songs of Willow Frost we learn the heart-wrenching stories of mother and son as the writer slips back in time to Willow's story and forward again to the 1930's to William's story and how the two stories meld together.  It is sad and yet there's a thread of hope throughout.  Regardless of the sorrow and trials, abuse, and outcast of both mother and son in society, each struggles to look for the good and to seek the silver lining, and to find ultimately what each has lost....each other.

If you enjoy historical fiction or general fiction and a novel that will elicit tears and disgust as well as tender feelings, I readily recommend Songs of Willow Frost. It's a story of love and loss, prejudice and sorrow and, above all else, hope from the author of Hotel on the Corner of Bitter and Sweet.  A gem? Well a rhinestone at the very least.  I think I'll find that gem with his earlier book, his debut novel Hotel on the Corner of Bitter and Sweet! 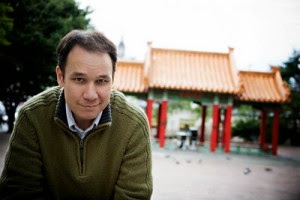 The son of a Chinese American father, Jamie Ford is the author of the New York Times bestselling novel Hotel on the Corner of Bitter and Sweet, which won the Asian-Pacific American Award for Literature. Having grown up in Seattle, he now lives in Montana with his wife and children.
Connect with Jamie on his website, Facebook, Twitter, and Pinterest.