To Kill a Mockingbird by Harper Lee - book review 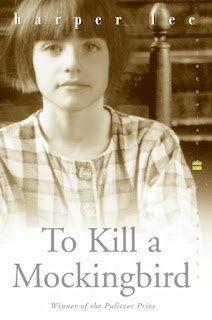 The unforgettable novel of a childhood in a sleepy Southern town and the crisis of conscience that rocked it, To Kill A Mockingbird became both an instant bestseller and a critical success when it was first published in 1960. It went on to win the Pulitzer Prize in 1961 and was later made into an Academy Award-winning film, also a classic.


Compassionate, dramatic, and deeply moving, To Kill A Mockingbird takes readers to the roots of human behavior - to innocence and experience, kindness and cruelty, love and hatred, humor and pathos. Now with over 18 million copies in print and translated into forty languages, this regional story by a young Alabama woman claims universal appeal. Harper Lee always considered her book to be a simple love story. Today it is regarded as a masterpiece of American literature. (from GoodReads)

----
This is my second time reading To Kill a Mockingbird by Harper Lee and it was just as engaging and emotion wrought the second time around.  Since it has been a number of years between readings, I had forgotten some of the details and outcomes of certain situations and found myself genuinely aghast at a particular outcome and equally happy at another, feeling it was justified.

To Kill a Mockingbird is told from the point of view of young "Scout", Jean Louise Finch, a tomboy of a girl more comfortable in overalls and bare feet than a dress.  The setting is Alabama and segregation is everywhere.  The Finch household employs Calpurnia, a black lady who acts as maid and caregiver for the children but who is really as valuable a part of the family as those born into it.  Atticus Finch is a lawyer assigned the case of a young black man accused of raping a white woman.


When his daughter asks Atticus Finch if he was defending a Negro and why, this is Atticus' response:


After confirming that he was defending a man named Tom Robinson, Atticus said, "Scout, you aren't old enough to understand some things yet, but there's been some high talk around town to the effect that I shouldn't do much about defending this man.  It's a peculiar case--it won't come to trial until summer session...."


When Scout asks Atticus why he is defending Tom he said, "For a number of reasons.....The main one is, if I didn't I couldn't hold up my head in town, I couldn't represent this country in the legislature, I couldn't even tell you or Jem not to do something again."


"Because I could never ask you to mind me again.  Scout, simply by the nature of the work, every lawyer gets at least one case in his lifetime that affects him personally.  This one's mine, I guess. "

This is but one example the author uses to show the nature of Atticus.  He is honourable and upstanding and compassionate and it takes the entire book for young Scout to realize these traits in her father and to see the society she is growing up in as less than ideal.  She is a fighter, but as she matures as much as a child of seven odd years can, she learns to use her head more than her fists and she learns about honour, family and equality for all.  (Scout was six as the story began. The story takes place over three years.)

As the case develops,  it is soon known that things are not as they seem but some people turn a blind eye just the same.  At this time in history it is almost unheard of for a black person to see real justice, though Atticus does all in his power to make the truth be known and to defend not only legally but physically and verbally, his client.


"Simply because we were licked a hundred years before we started is no reason for us not to try to win," Atticus said. [when Scout asked why he was trying to win the case while it appeared that it wouldn't be possible]

It is sad to consider that this book was once banned from schools and libraries.  Perhaps the individuals who wanted it banned did not read it for To Kill a Mockingbird was ahead of its time in promoting equal rights for all and the value of one soul is no greater than another.  To have the opportunity to read and to study To Kill a Mockingbird, is a privilege.  For a book that raises the question of racism and addresses the issues through the eyes of the innocent child, is certainly a book that I would encourage all people to read, particularly young people.  Atticus teaches his children the value of a human life.  I wish all would learn the same lesson.  This world would be a better place for it.


About the author:  [Nelle]"Harper Lee was born in 1926 in Monroeville, Alabama, where she attended Huntingdon College and studied law at the University of Alabama.' (back of book)  She is the recipient of the Pulitzer Prize and other literary awards.