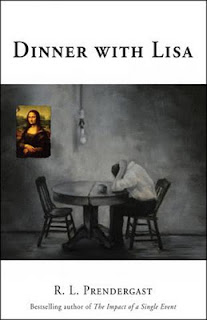 Dinner With Lisa
Author:  R. L. Prendergast
Copyright:  2011
Publisher: Dekko Publishing
Genre: Historical Fiction
ISBN 9780978454821
Edition:  Paperback
Source:  A copy was supplied by the author for review.  This does not influence this reviewer's opinion nor this review.


What started as a grim look at the dirty thirties in Dinner With Lisa, became a heart wrenching but humorous and insightful look at the plight of many but one man and his family in particular during the depression era of the 1930s.  Widower Joseph Gaston and his four young children have travelled by train from Ontario to the town of Philibuster Alberta searching for work and a new life.  Joseph arrives to see the situation is rather bleak in Philibuster but he has a job to go to, or so he thinks.  When the job falls through, Joseph feels the burden of keeping food on the table and a roof over the heads of his young family.  He is in the same boat as several men in the town...in the country.  Try as he might, the burden becomes heavier and heavier until he feels he will snap.  But his brother won't let him down.  He shows Joseph another side to living during the bleak economic times....but does it help or hinder?
Prendergast paints a bleak picture of the economic depression of the 1930s with detail so vivid the reader has an image of the town and its residents perfectly etched in their minds.  The characters are flawed, charming or ruthless, secretive, underhanded, loyal or inhumane, depending on the individual.  My heart ached for the plight of many during this time and I cheered Joseph on as he championed the cause of the underdog, at times risking his own well-being.  Joseph must fight more battles than one can surmise early in the story and, really, he does have a rather large share of bad fortune but it helps to mold him into the man he is at the end of the book.  Dinner With Lisa is about trials and transitions and hope.  Prendergast tells it well.
Rated 4/5

Meet the Author:  "R. L. (Rod) Prendergast was the entrepreneurial kid you saw on your neighbourhood street selling lemonade on a hot summer's day. Recognizing young Rod's preoccupation with money, his mother bribed him to read with an offer of 25 cents per book-and instilled in him a lifelong love of reading. Although he continued down the path of industry-he started and sold his first business before completing his Bachelor of Commerce-he continued to read voraciously. After a number of years working in sales, marketing and management for several companies he spent a year's sabbatical surfing and reading in New Zealand and, free of business pressures, he began to write. Those first words became the backbone of The Impact of a Single Event-which was long listed for the Independent Publishers Book Award for literary fiction, and which became a national bestseller in Canada. Spurred on by the success of his first novel, he took another sabbatical and wrote Dinner with Lisa. He is currently working on his next book."
Posted by Shirley at 8:47 PM