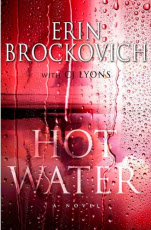 My review will follow soon.  Hot Water was released for sale November 8, 2011.
Posted by Shirley at 3:53 PM