Other Voices, Other Rooms may offer more of himself than Capote intended.- 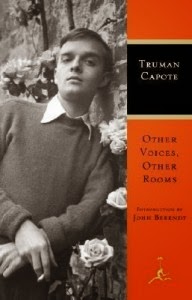 Published when Truman Capote was only twenty-three years old, Other Voices, Other Rooms is a literary touchstone of the mid-twentieth century. In this semi-autobiographical coming-of-age novel, thirteen-year-old Joel Knox, after losing his mother, is sent from New Orleans to live with the father who abandoned him at birth. But when Joel arrives at Skully’s Landing, the decaying mansion in rural Alabama, his father is nowhere to be found. Instead, Joel meets his morose stepmother, Amy, eccentric cousin Randolph, and a defiant little girl named Idabel, who soon offers Joel the love and approval he seeks.

Fueled by a world-weariness that belied Capote’s tender age, this novel tempers its themes of waylaid hopes and lost innocence with an appreciation for small pleasures and the colorful language of its time and place.

A young Truman Capote could be the very same boy in the novel, Other Voices, Other Rooms.  In fact, it's been said this novel is the closest thing to being autobiographical.   Though situations may differ, there is a parallel between Joel and Truman as young teenage boys growing up in the south.  His desire for family and inclusiveness shows especially in this debut novel.

Capote has a gift with the written word that is at once visual and emotional.  You, as the reader, can feel the emotions, enjoy the lyricism, and ponder the sometimes disjointed imaginings that are one thing but then another.

I found Other Voices, Other Rooms a fascinating read.   I began reading knowing this first novel of Capote's was considered somewhat semi-autobiographical.  Capote takes the reader back to a time and place where leisurely summer days can take the imagination to places far away and yet near.  The shade from the hot sun, a cool drink, and good friends are excellent companions for Joel and are we any different?  Other Voices, Other Rooms is relatable, imaginative and a superb example of the gift Capote had with the written word.

Truman Capote was a native of New Orleans, where he was born on September 30, 1924.  His first novel, Other Voices, Other Rooms, was an international literary success when first published in 1948, and accorded the author a prominent place among the writers of America's post-war generation.  He sustained this position subsequently with short-story collections (A Tree of Night, among others), novels and novellas (The Grass Harp and Breakfast at Tiffany's), some of the best travel writing of our time (Local Color), profiles and reportage that appeared originally in The New Yorker (The Duke in His Domain and The Muses Are Heard), a true crime masterpiece (In Cold Blood), several short memoirs about his childhood in the South (A Christmas Memory, The Thanksgiving Visitor, and One Christmas), two plays (The Grass Harp and House of Flowers) and two films (Beat the Devil and The Innocents).

Mr. Capote twice won the O. Henry Memorial Short Story Prize and was a member of the National Institute of Arts and Letters.  He died in August 1984, shortly before his sixtieth birthday.  (biography from Breakfast at Tiffany's by Truman Capote)