The Reckless Engineer by Jac Wright 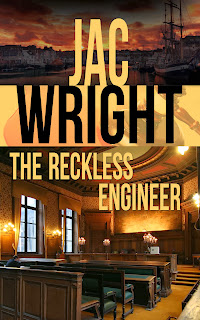 Jack Connor's lives an idyllic life by the Portsmouth seaside married to Caitlin McAllen, a stunning billionaire heiress, and working at his two jobs as the Head of Radar Engineering at Marine Electronics and as the Director of Engineering of McAllen BlackGold, his powerful father-in-law Douglas McAllen's company in extreme engineering in Oil & Gas.  He loves his two sons from his first marriage and is amicably divorced from his beautiful first wife Marianne Connor.  Their idyllic lives are shattered when the sexy and alluring Michelle Williams, with whom Jack is having a secret affair and who is pregnant with his child, is found dead and Jack is arrested on suspicion for the murder.

Jeremy Stone brings in London's top defence attorney, Harry Stavers, to handle his best friend's defence.  While Jack is charged and his murder trial proceeds in the Crown Court under Harry’s expert care, Jeremy runs a race against time to find the real killer and save his friend, if he is in fact innocent, in a lurid saga of love, desire, power, and ambition.

The Reckless Engineer is a relatively short novel as an e-book at 182 pages, but it is packed with drama beginning with a phone call to Jeremy from Jack Connor.  The two men had worked together previously in an engineer firm, with whom Jack is still employed, and had become friends.  Jack had Jeremy's back during a dark time and now he was requesting a return favour. Desperately seeking help after being arrested under suspicion for the murder of his pregnant mistress, Jack turned to Jeremy who hooked him up with a top defence attorney.  It doesn't end there for Jeremy though.  His curiosity finds him sleuthing the countryside in compromising situations in his efforts to clear his friend.  It's his path to discovery that keeps you turning the pages.

Jac Wright gathers together a group of possible suspects but you will likely not guess who did the deed and framed Jac.  That twist comes at the end and you realize Wright had dropped cleverly disguised hints all along.  I love to see that ability, especially in a new to me mystery author.

Engineering is not commonly found in mysteries.  You find writers, police officers, elderly spinsters, journalists with cats, and a myriad of others but never before have I come across engineers in this genre.  Jac Wright intends to change that with this series, of which The Reckless Engineer is the first.  He brings to the series his own personal knowledge as an engineer, expounding upon situations in his realm of experience thus introducing the mystery enthusiast to an entirely new and interesting facet to the genre.  If you're a mystery lover sleuthing out something new, check out Wright's series, engineered to reaffirm your love.