Last Saturday my husband and I attended the annual Street Performers Festival here in Edmonton.  It was blazing hot, 28 Celsius but I am sure it was hotter at Churchill Square! The performances were fascinating and offered great entertainment.  We watched four shows and conducted a taste test of all the green onion cake vendors, of which there were three.  The first, Green Onion Cakes, came out the best for flavour, greaselessness, and was served on a disposable plate with hot sauce and a side of sour cream (an extra 50 cents).  They know they're the best too!!  Another vendor served their rather greasy onion cakes with packets of hot sauce that sat out in the heat of the sun and no option of sour cream.  The third contestant was a close second.  They had a hot sauce very similar to vendor #1 but their onion cake wasn't as good.  No sour cream either.  Here's the winner: 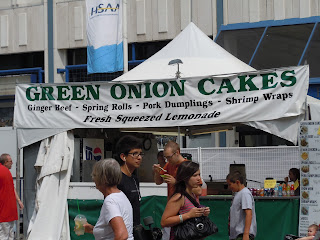 As we sat eating one of these onion cakes, I noticed the girl next to us was reading a book!  I know, at the Street Performers! Sheesh!!!  I only wish I'd thought of that. ;) There are some nicely shaded areas around the square that would be nice to stretch out in with a book in hand.

So, of course, I had to ask what she was reading.  It was Brisingr!!  We spoke a bit about her choice. She'd waited to read book three in the series until she got a copy of book four to read directly afterwards.  But, she read the first two again before reading the third!  Do you do that?  I do, unless it's a lengthy series, of course! 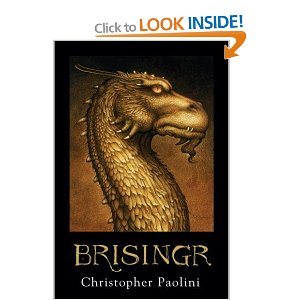 Following the colossal battle against the Empire’s warriors on the Burning Plains, Eragon and his dragon, Saphira, have narrowly escaped with their lives. Still there is more at hand for the Rider and his dragon, as Eragon finds himself bound by a tangle of promises he may not be able to keep.First is Eragon’s oath to his cousin Roran: to help rescue Roran’s beloved, Katrina, from King Galbatorix’s clutches. But Eragon owes his loyalty to others, too. The Varden are in desperate need of his talents and strength—as are the elves and dwarves. When unrest claims the rebels and danger strikes from every corner, Eragon must make choices— choices that take him across the Empire and beyond, choices that may lead to unimagined sacrifice.Eragon is the greatest hope to rid the land of tyranny. Can this once-simple farm boy unite the rebel forces and defeat the king?" (from Amazon.ca)


I haven't read any of this Inheritance series yet; though I have seen the movie Eragon.  Have you?  Would you recommend the series?

So, after three green onion cakes, split between the two of us; a 32 oz cup of home-brewed root beer; two bottles of water (500 ml) each, four shows and a visit with a friend we ran into there; I was done.  I just couldn't take in any more.  Too hot, tired and feeling a little cranky; we made our way to the LRT  where we both fell asleep after deciding to take the train all the way to the end of the track (we'd never done it before!).  Of course, there is no end of the track to be remembered as we both slept through the trip...heads jerking as we fought it and eventually gave in...to pure heat exhaustion!  I came home and slept.

How's that for a Saturday outing?