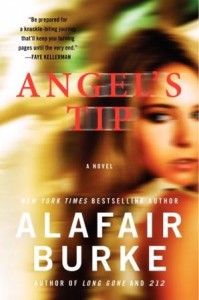 Angel's Tip
Author:  Alafair Burke
Published:  June 2012
Publisher:  Harper Collins
Edition:  Paperback
Pages:  368
Source:  Thank you to TLC Book Tours and the publisher for this complimentary copy.  The opinion expressed in this review is my own.
"Acclaimed thriller writer Alafair Burke delves into the underworld of the Manhattan nightclub scene inAngel’s Tip. Burke is the daughter of crime fiction superstar James Lee Burke, creator of Cajun detective Dave Robicheaux, prompting the Fort Worth Star-Telegram to proclaim that “this fast-paced-but-human thriller proves that writing talent is genetic.” A superb crime novel featuring NYPD Detective Ellie Hatcher (“a strong female protagonist in the tradition of Sara Paretsky’s V.I. Warshawski and Marcia Muller’s Sharon McCone” —Boston Globe),Angel’s Tip follows Ellie’s investigation into the murder of a young college student, quite possibly by a member of New York’s young moneyed elite, and fans of Lisa Gardner, Karin Slaughter, Harlan Coben, and Sue Grafton will most definitely want to trail along." (from TLC Book Tours)
My Review:
I love a good mystery, particularly one that keeps me guessing as to who the "bad guy" is and Angel's Tip was just that for me!  I kept thinking the original arrest of a suspect was just too "pat".  It doesn't happen that easily nor that quickly, and I was right.  But Alafair Burke is a master at keeping the reader on his/her toes, pondering and turning back pages to re-read portions as we play detective along side Ellie Hatcher.  Ellie is the only woman on her squad and only just given the promotion weeks previous to discovering a body while out jogging with her brother.  What seems coincidence becomes even less so and more of a strategy on behalf of the killer.  His ultimate goal - to snag the detective herself!

Angel's Tip feels authentic, as it would be expected to be as it is written by a former prosecuting attorney turned law professor. Alafair uses her background and the expertise of many to authenticate the scenes and strategies within Angel's Tip.  Though there are some individual cases of disappearance of single young women from which Alafair drew inspiration in plotting this novel, the story line is the result of a "what if" mentality.  What if this were to happen, how would the killer respond?  How would the detectives and reporters react?  It's like reading a good case of CSI, though better because you can experience it on your terms. 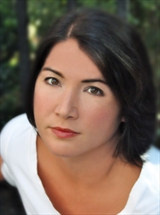 Alafair Burke is the bestselling author of seven novels, including the stand-alone thriller, Long Gone, and the Ellie Hatcher series which includes 212, Angel’s Tip, and Dead Connection. A former prosecutor, she now teaches criminal law and lives in Manhattan.
Website | Facebook | Twitter