Movers, Dreamers, and Risk-Takers: Unlocking the Power of ADHD by Kevin Roberts (a review) 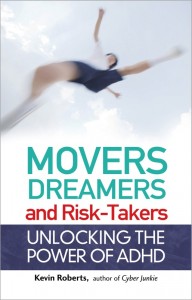 Movers Dreamers and Risk-takers Unlocking the Power of ADHD

Author:  Kevin Roberts
Published: June 2012
Publisher: Hazelden Publishing
Pages: 250
Genre: Health and Well-being
Source:  My thanks to TLC book tours for providing a complimentary copy of Movers Dreamers and Risk-takers to review on this blog.  This review is my honest opinion of the book, without prejudice.
(from TLD book tours) "The negative aspects of Attention Deficit/Hyperactivity Disorder (ADHD) are well known–impulsivity, difficulty paying attention, lacking follow through, procrastination, boredom, anxiety, etc.  But what many people don’t know is that when these same traits are put to good use, those with ADHD can live highly functional, successful, and exciting lives. When Kevin Roberts realized his potential, he decided to devote his life to helping children and adults with ADHD. Because he shares their condition, he knows that with proper support and coaching, they, like him, can turn their lives around.
In his new book MOVERS, DREAMERS, AND RISK-TAKERS: Unlocking the Power of ADHD (Hazelden Publishing; June 2012; $14.95/Original Trade Paperback; $11.95/E-book) Roberts passionately relates his experiences and those of others to explain what ADHD is; how it manifests in kids and adults; and how the advantages of ADHD can be used to better people’s lives.  Some of the ideas Roberts presents in MOVERS, DREAMERS, AND RISK-TAKERS are:
Filled with the latest research about ADHD (see the appendix called “The Mystery of the ADHD Brain”) and a “tool chest” of practical advice on how to break down some of the most frustrating road blocks facing ADHDers and their caregivers, MOVERS, DREAMERS, AND RISK-TAKERS is full of possibilities.  There is a panoply of negativity surrounding ADHD, and with his new book, Roberts makes a point of turning these perceptions around for good."
My thoughts:


When I discovered this book through TLC Book Tours, I had to read it!  You see, I know a few people with ADHD.  I love them. But sometimes, I just don't understand them.  Movers, Dreamers, and Risk-takers: Unlocking the Power of ADHD has brought me some understanding and empathy.  I now better know why "Ed" can't sit still.  Why "Ed" is stimulated by risky things and has even "medicated" himself.  "Ed" has grown so much but still struggles with ADHD daily. "Ed" is a part of my life.


Kevin Roberts' story is similar to "Ed's", aside from the self-medication.  In fact, the stories he shares of his family and growing up in his slightly dysfunctional family, help the reader to understand the dynamics of living with someone with ADHD and his/her family, and the stress it can put on relationships.  Kevin was fortunate.  His mother treated him as though he was "normal".  At school and everywhere else, he was labelled and told he was a problem, among other things.  It was at home that he felt free from judgment.  Though he realizes life at home was not normal, he now has an understanding and acceptance of the situation because he knows now that most, if not all, his   siblings also have ADHD.  Having lived with virtually every scenario possible, Kevin's experience has enabled him to be a better counsellor and teacher.


When Kevin began his career as a counsellor and coach for individuals with ADHD, he began to see himself in a new way.  He found methods of using ADHD to his benefit, and ways to minimize some of the drawbacks.  He teaches how to find the advantages of ADHD and how to use it to its best advantage.  Here's a rundown of the seven chapters of Movers, Dreamers and Risk-takers:


Appendix:  The Mystery of the ADHD Brain
Notes
About the Author

I love that Kevin Roberts shows the pluses and doesn't dwell on the negatives.  Using humour and optimism, Mr. Roberts reveals a side of ADHD that people are often unaware of, especially those who live the life daily.  If only every child with signs of ADHD could have a counsellor like Mr. Roberts, I believe more children would be happier, understanding who they are and their value to society.  I wish "Ed" had had this.  Positive reinforcement makes so much difference!  Movers, Dreamers and Risk-takers is a must-read for every parent, caregiver, teacher and individual who knows someone, works with someone and/or cares for someone who struggles with ADHD.  It is powerful.  For all the knowledge it imparts, but even more for the power it gives to families and individuals to make ADHD a blessing rather than a curse; Movers, Dreamers, and Risk-takers is invaluable!!

About Kevin Roberts
Kevin Roberts was born in Detroit, Michigan, attended 12 years of Catholic school, and graduated from the University of Michigan. He taught high school and middle school social studies and foreign languages for four years. For the last 13 years, he has been an ADHD Coach, helping ADHD individuals succeed in school and life. He conducts support groups for teens and adults who struggle with cyber addiction and is the author of Cyber Junkie: Escape the Gaming and Internet Trap. Roberts is a nationally-recognized expert in cyber addictions and also lectures widely on Attention Deficit Hyperactivity Disorder (ADHD). He speaks French, Spanish, and German in addition to some conversational capacity in Greek, Italian, Arabic, Quechua and Chinese.
Learn more about Kevin and his work on his website, Kevinjroberts.net.