The Lucky One by Nicholas Sparks - Book Review 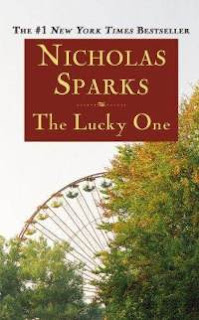 (from the back cover) After U.S. Marine Logan Thibault finds a photograph of a smiling young woman buried int he dirt during his tour of duty in Iraq, he experiences a sudden streak of luck, winning poker games and even surviving deadly combat.  Only his best friend, Victor, seems to have an explanation for his good fortune:  the photograph--his lucky charm.

Filled with tender romance and terrific suspense, The Lucky One is an unforgettable story about the surprising paths our lives often take and the power of fate to guide us to true and everlasting love.

The Lucky One is the story of a young marine who, after returning from war, pursues his destiny, whatever that may mean.  His friend Victor, a strong believer in such things, is persuaded that the photo Logan found has preserved his life in-so-much that Victor deemed it possible to remain alive during the war by being in close proximity to Logan.  Logan is not convinced. However, he and Victor come home from war while many of their brigade aren't so lucky.  Still in possession of the photo of a young woman, Logan decides to follow Victor's advice when he tells him he must repay the debt.  He must find the woman in the photo.

Nicholas Sparks weaves a story of love, of mystery, of intrigue and suspense in this novel.  This was my second time reading it and I enjoyed it immensely, despite knowing how the story twists and the plot thickens.  He develops each character so the reader feels they know the individual.  From the quirky, intelligent and loveable Nana; .

Beth motioned to the set. "How're the Braves doing?"
"Like a bunch of carrots."
"Is that good or bad?"
"Can carrots play baseball?"
"I guess not."
"Then you have your answer." (The Lucky One p. 84. Conversation between Beth and her grandmother)

"He was obsessed with you even though you'd never met, like someone who gets obsessed with movie stars.  And what did he do?  He hunted you down, but seeing you from afar-or simply meeting you-wasn't enough.  Instead, he had to become part of your life.  That's what dangerous stalkers do, Beth." (The Lucky One. p. 327)


to (Elizabeth) Beth the school teacher, divorcee and mother, who feels inordinantly unlucky in love;

"She found it hard to breathe.....
On the drive home, her mind flashed from one image to the next, a kaleidoscope of sight and sound and smell.  She tried to convince herself that Keith was lying, grasping for a way to rationalize his news.  It was possible, considering the way he'd lied in the past, and yet...." (The Lucky One. pp 329-330)

to Logan the drifter, ex-marine, mysterious and brooding.  In the midst of it all is young Ben - a boy at odds with his father, adored by his mother and grandmother - who finds in Logan a kinship and in Zeus, Logan's german shepherd, a doting companion.  Sparks introduces us and seduces us so we are right there with the characters cheering them on, chastising at times, and eager to see justice.  The sudden plot turn near the end leaves the readers hanging until the epilogue.  A remarkable tool the author has developed to keep you guessing, until the last moment, if all will end happily ever after.

Linking up with The Book Vixen for the Nicholas Sparks reading challenge http://www.thebookvixen.com/2010/11/2011-reading-challenge-sign-up-nicholas.html