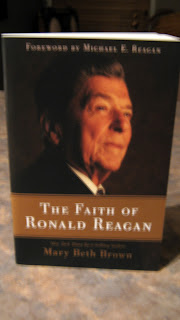 The Faith of Ronald Reagan
Author:  Mary Beth Brown
Copyright: 2004, 2011
Publisher:  Thomas Nelson Inc.
Pages:  237
Genre:  Biography
(from the back cover) With warmth and insight, this best-selling book by Mary Beth Brown delves into the spiritual journey of America's 40th president and offers profound stories of the provisions God made in Ronald Reagan's life-from first making it as an actor to winning the presidency, from surviving an assassination attempt to eventually changing the face of politics and the world.
Supported by Ronald Reagan's own words and writings plus firsthand interviews with his family, friends, and co-workers, Brown weaves a magnificent story that inspires as it informs.  Reagan's strong devotion to God will encourage believers to enter public service, allowing their faith to motivate their actions, and will draw focus to Christ's matchless sacrifice-forever near and dear to President Reagan's heart."
﻿"We can rekindle the spirit of America, because God intended this land to be free, because we are free to dream, to plan, and to make our dreams come true." ~ Ronald Reagan, 1980
This quote personifies the man, the actor, the leader of the United States.  Born in Tampico, Illinois February 6. 1911, to Nelle Wilson Reagan and John Edward "Jack" Reagan following one of the worst blizzards, Ronald Wilson Reagan was born at home under the care of a local midwife.  The local doctor was out on another call leaving Jack to trudge through drifts of snow a foot or more deep to find help for his wife who was experiencing a difficult labour.  The doctor arrived after the birth and announced "he looks like a fat little Dutchman."  Thus he got his nickname "Dutch".
Ronald was the second born in the family, his older brother's name was Neil.  They grew up in the small town of Dixon during times of a poor economy.  Ronald's father was an Irish Catholic and his mother a "born-again Christian".  From his father he learned the value of honest hard work and from his mother his faith.
An athlete with a dream and a scholarship, Ronald attended college, played football and later became a sportscaster which was the first step in his plan towards an acting career.  In Hollywood his career took off, he married and divorced.
Years later, as his life turned toward the political aspect of the film industry, Ronald met and married Nancy Davis.  They had two children, Ron Jr. and Patti. He ran for governor of California and later, the president of the United States.  Ronald Reagan felt he was called to serve the people.  It wasn't that he sought power, he saw things that needed changing and, with the God's help, he sought to change his country and the world for the better.
"He sought to mend America's wounded spirit, to restore the strength of the free world, and to free the slaves of communism."  "His politics had a freshness and optimism that won converts from every class and every nation-and ultimately from the very heart of the evil empire."  (Margaret Thatcher, eulogy)
Reagan and Margaret Thatcher (prime minister of Britain) became good friends as they battled communism, were instrumental in the end of the Cold War and the fall of the Berlin wall.  Gorbachev (president of the Soviet Union) and Reagan worked together to rebuild the Soviet Union from a country of communism to a land of freedom.
"We have been blessed with the opportunity to stand for something-the liberty and freedom and fairness.  And these things are worth fighting for, worth devoting our lives to."  Ronald Reagan, 1985
Reagan's many kindnesses and deeds are touched upon in this book.  Could this man have achieved all that he had alone?  He is the first to have given credit to God for his successes.
'If we trust him, keep his work, and live lives for his pleasure, he'll give us the power we need-power to fight, to finish the race, and to keep the faith." Ronald Reagan, 1984
I enjoyed reading this biography of one of the most influential men, an accomplished actor and a much beloved president.  Reading this, I discovered the depth of the faith of Ronald Reagan and his strength of character.  He did great good for his fellow men, whether in his own country or abroad.  He knew no prejudice but sought for freedom for all.  I have greater admiration for him, having read this book.
Rated 3/5.
This is book one for me in the Dewey Decimal Challenge hosted by The Introverted Reader.  So far, with one book read in the 200's for biographies, I am a dilletante!
Posted by Shirley at 2:14 AM