The Golem and the Jinni by Helene Wecker (wow!) 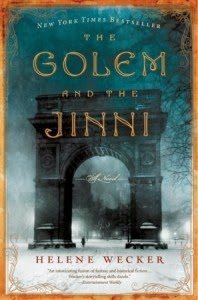 The Golem and the Jinni
Author:  Helene Wecker
Published: December 31/13
Publisher:  Harper Perennial
Pages:  512
Includes: Epilogue and P.S. section (about the author, about the book, read on)
Edition:  Trade Paperback
Genre:  Fiction, fantasy, historical fiction
Source:  A complimentary copy was provided by TLC Book Tours and the publisher for the purpose of this review.  Receipt thereof does not influence this review nor my opinion.

Chava is a golem, a creature made of clay, brought to life by a strange man who dabbles in dark Kabbalistic magic. Ahmad is a jinni, a being of fire, born in the ancient Syrian Desert. Trapped in an old copper flask by a Bedouin wizard centuries ago, he is released accidentally by a tinsmith in a Lower Manhattan shop.
Struggling to make their way in 1899 New York, the Golem and the Jinni try to fit in with their immigrant neighbors while masking their true selves. Meeting by chance, they become unlikely friends whose tenuous attachment challenges their opposing natures, until the night a terrifying incident drives them back into their separate worlds. But a powerful menace will soon bring the Golem and the Jinni together again, threatening their existence and forcing them to make a fateful choice.
Marvelous and compulsively readable, The Golem and the Jinni weaves strands of folk mythology, historical fiction, and magical fable into a wondrously inventive and unforgettable tale.


I don't typically read fantasy but when The Golem and the Jinni arrived at the bookstore, it caught my attention.  I had recently read Night Circus by Morgenstern (considered fiction with definite fantasy elements) and loved it but for whatever reason I didn't buy The Golem and the Jinni at the time.  Recently TLC Book Tours announced a book tour for this same novel and, remembering my desire to read it, I jumped at the opportunity.

The Golem and the Jinni is a mythical and magical tale.  A Golem was made by its creator in the form of a woman to be a companion/wife for a man (Schaalman) travelling from Europe to America in the late 1890s.

"I'll try," he said. "The results may not be as precise as you might wish.  One can only do so much with clay."  Then his face darkened. "But remember this.  A creature can only be altered so far from its basic nature.  She'll still be a golem.  She'll have the strength of a dozen men.  She'll protect you without thinking and she'll harm others to do it.  No golem has ever existed that did not eventually amok.  You must be prepared to destroy her."  (pages 4-5)

When Schaalman dies aboard the ship, the golem, Chava, is left alone... a stranger in New York.

Ahmad, is a jinni, a creature of fire and magical abilities.  Centuries previous Ahmad was imprisoned by a wizard, an iron cuff upon his wrist, in an intricately etched copper flask.  He is accidentally released from his prison within the flask by a tinsmith but the cuff remains and keeps him imprisoned without the ability to use the full range of powers he possesses.

Upon his release he confronts Arbeely who had freed him, demanding to know the whereabouts of the wizard who had imprisoned him.

"Of the many types of jinn [Ahmad] was one of the most powerful and intelligent.  His true form was insubstantial as a wisp of air, and invisible to the human eye.  When in this form he could summon winds, and ride them across the desert [the Syrian desert was his home].  But he could also take on the shape of any animal, and become as solid as if her were made of muscle and bone ... but his true nature was always that of a jinn, who were creatures of fire.... he never stayed in any one shape for very long." (pages 22-23)

When the two creatures, Jinni and Golem, meet by accident in the strange land they form a friendship.  In their union they share a bond recognizing in each other their true identity, two outsiders unique in their origins and abilities.  "... if I hide away forever, I'll go mad.  And neither of us should have to give every night over to our fears."  The idea had been building in his mind as he spoke, and now he said, "Come walking with me instead."  (page 206)

And so it began. Ahmad and Chava found a solace in their loneliness as they walked the streets together at night, neither of them needing to sleep.   Until one day the Golem's creator comes to America with evil designs.

Helene Wecker is a magician with words, weaving a fantastic tale of mythology in historic New York.  You can almost hear the panic in a man's voice who, upon seeing the jinni said, "What are you?.... I can look at you," the man said.  "There's no death in your face."  His tone was hysterical, his eyes so wide the whites shone.  He grabbed at the front of the jinni's coat and shouted up at him.  "I can see you!  You're made of fire!  Tell me what you are!" (page 208)

Or feel the pain as the jinni is put in confinement within the flask, a slave to the wicked wizard who captured him.  "There was a horrible sense of diminishment as the wizard's spell gathered and compressed his being, banking his essence to the merest spark.  Slowly the flask drew him in --- and time slowed to an elongated instant, full of the taste of metal and a wild, searing anguish." (page 438)

Such imagery!  Throughout the entire book (as if the quotes included herein aren't proof enough), historic New York and conversely the desert of Syria unfold like a motion picture, full of colour, life, danger and toil.   The plot is unique, tying the mythology of two cultures together in one in a tale where the characters own the story.  I am absolutely wowed by this incredible novel!  You simply must read it!!  I hope one day to see The Golem and the Jinni in theatres.  What an exotic and fantastic film that would be!

Helene Wecker received a BA from Carleton College in Minnesota and an MFA from Columbia University in New York. A Chicago-area native who has made her home in Minneapolis, Seattle, and New York, she now lives near San Francisco with her husband and daughter. The Golem and the Jinni is her first novel.
Visit Helene at her website, helenewecker.com, connect with her on Facebook and follow her on Twitter.