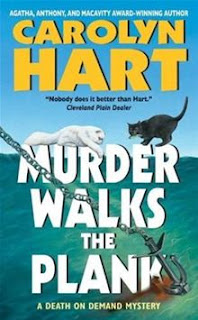 Synopsis:  "Annie Darling's murder mystery cruise in the waters off her not-always-idyllic isle of Broward's Rock is going swimmingly -- until one of the revelers plunges overboard. And despite hubby Max's courageous rescue attempt, faux murder turns all too quickly into real-life death. As the body count rises over the next few days, the popular proprietress of the Death on Demand bookstore begins to suspect that all the victims were murdered most foully, and that they are all connected in some unknown way. But what intrepid crime solver Annie does not realize is that the killer she seeks is more ingeniously efficient than most -- and the puzzle she wishes to unravel is, in reality, a time bomb packed with an explosive mix of arson, assault, kidnapping, robbery ... and homicide, naturally.
One false step and Annie, Max, and their canny cohorts will be blown off Broward's Rock for good." (from the cover)

Carolyn Hart never fails to entertain me while keeping me sleuthing right alongside her protagonist Annie Darling. Murder Walks the Plank is one cozy mystery, hard cover published in 2004, that I can't believe I hadn't read before now. Definitely one of my favourites!  I try to read every single Carolyn Hart Death On Demand series book I can find!

Annie Darling has planned another exciting event, this time aboard a ship cruising in the waters near Broward Rock, South Carolina. (fictional island). Annie is pleased to see so many in costumes of popular book sleuths and all is going well when there's a scream and someone is overboard. Is it a suicide or murder? Within days, the body count grows as shortly thereafter another murder occurs, a car is missing and a wealthy senior is dead, presumably another suicide. Things just don't seem to be so cut and dry to Annie who proceeds, with the enlistment of her husband and some local friends, to uncover the mystery of these occurrences and find the murderer before he/she strikes again.

I began to suspect who the murderer was at about the same time that Annie did, though it wasn't revealed until later in the story. This was a hard one to put down, though I had to read it in brief snatches because of my schedule of late.  That's the worst way to read a book that you are so intent upon!  Murder Walks the Plank is another magnificent example of superb writing by famous story teller Carolyn Hart!  Highly recommended!