The Cottage at Glass Beach by Heather Barbieri 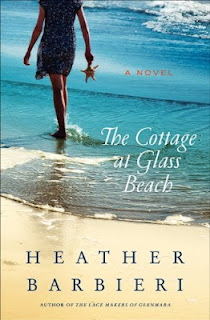 Source:  Thank you to TLC book tours and Harper Collins Publishers who supplied an ARC of The Cottage at Glass Beach, complimentary to me, without prejudice.  The opinions in this review are my own without influence.


"When Nora Cunningham's golden boy husband, the youngest attorney general in Massachusetts history, is caught in a public scandal revolving around his affair with another woman, Nora flees Boston with her two daughters and goes to Burke's Island, a remote, rustic island off the coast of Maine, where she was raised until the age of five.  While there, she must grapple with her future in the form of a mysterious fisherman, and with the past as she searches for clues to her mother's disappearance, which precipitated Nora's departure from the island, and which has never been resolved.  As she searches for answers Nora finds that the line between the real and the imagined, the past and the present, is thinner than she realized and that she must make difficult choices to save her daughters and herself." (synopsis supplied by the publisher)

Summer is approaching and if you are anything like me, you imagine yourself on a somewhat remote island, seaswept and somewhat wild with beaches and rocky crags inhabited by a variety of wild birds and seals.  Such an island is Burke's Island, Nora's hometown in The Cottage at Glass Beach and her refuge from the storm that is her life back in Boston.  Whisking her two young daughters away from the onslaught of media surrounding the reveal of her politician husband's indiscretion/mistress, Nora finds solace and welcome on this island.  Nora's Aunt Maire greets the little family with open arms and heart, glad to have the opportunity to renew acquaintance with her estranged niece.  But her own secrets and conscience give her conflicting feelings about Nora's return.

What Nora finds is not so much a refuge, but an awakening of long buried memories of the mysterious disappearance of her mother.  Her two daughters, seven and twelve years old respectively, are at opposite spectrums, one welcoming the summer vacation on Burke's Island and the other miserable and contrary about the separation of her parents.  Turmoil stirs beneath the surface with Nora's eldest daughter and within herself as she meets a mysterious ship-wrecked man, tries to sort through her own conflicting feelings about her marriage, while uncovering the mystery of her mother's disappearance.

Heather Barbieri uses descriptives well, transporting the reader to envision scenes such as the following:

"The ocean reared back and threw itself against the rocks, sending up plumes of sprays.  Pebbles and shells tumbled over the shore with the sound of dragging chains and breaking crockery." (p. 76)

There were a few areas in the story that I had problems with, mostly pertaining to a lack of conviction the author seemed to have regarding the character of her "cast."  Here are some examples, keep in mind that these may change prior to final printing:

"I'm whatever you want me to be," he said, apparently mindful of Ella's need to occupy the lead position.

"Does it hurt?" Annie asked, voicing a question Nora probably had herself.

There were a couple other instances wherein a character would say something or do something followed directly with a comment like "possibly because.....".  This irked me a bit because these are the author's characters, she has developed them and their personalities and using phrases like "possibly because" feels as if she in undermining her character development. This just bugged me enough to mention it here.  I am hoping these will be addressed prior to the final printing, as my copy is, after all, an ARC.

The writing, otherwise, has a mystical descriptive quality that captures the nuances of Burke's Island and its residents, rendering it all as mysterious as the finest folklore, stirring the imagination while leaving some details open to pondering. The story of The Cottage at Glass Beach is a perfect beach read.  BTW,  love this cover!

Meet the author, Heather Barbieri.  The author of two previous novels, The Lace Makers of Glenmara, and Snow in July, Heather Barbieri has won international prizes for her short fiction. She lives in Seattle with her family.