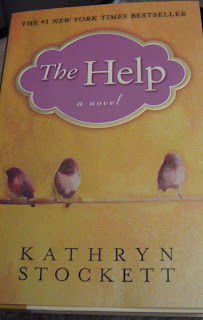 The Help
Author:  Kathryn Stockett
Publisher:  G.P. Putnam's Sons, published by the Penguin Group (Amy Einhorn Books)
Copyright:  2009 by Kathryn Stockett
Pages:  444
Acknowledgments and "Too Little, Too Late" included at the novel's end
(from the cover) "Twenty-two-year-old Skeeter has just returned home after graduating from Ole Miss.  She may have a degree, but it is 1962, Mississippi, and her mother will not be happy till Skeeter has a ring on her finger.  Skeeter would normally find solace with her beloved maid Constantine, the woman who raised her, but Constantine has disappeared and no one will tell Skeeter where she has gone.

Aibileen is a black maid, a wise, regal woman raising her seventeenth white child.  Something has shifted inside her after the loss of her own son, who died while his bosses looked the other way. She is devoted to the little girl she looks after, though she knows both their hearts may be broken.

Minny, Aibileen's best friend, is short, fat, and perhaps the sassiest woman in Mississippi.  She can cook like nobody's business, but she can't mind her tongue, so she's lost yet another job.  Minny finally finds a position working for someone too new to town to know her reputation.  But her new boss has secrets of her own.

Seemingly as different from one another as can be, these women will nonetheless come together for a clandestine project that will put them all at risk.  And why?  Because they are suffocating within the lines that define their town and their times.  And sometimes lines are made to be crossed."

My Thoughts:  My interest in this novel was tweaked by a niece who read it for book club in the States and by recommendations from others who'd enjoyed it.  The fact that this book placed #1 on the highly acclaimed New York Times Bestseller list increased my desire to read this much talked about novel.
I looked up the book on the penguin.ca site and found this book is recommended for adults ages 18 and up.  There's a rumour about this book being adapted to film and USA Today's Book Buzz confirms it saying it will likely hit theatres fall 2011.  Paperback editions have been scheduled and  rescheduled due to the overwhelming sales of the hard cover edition of The Help.  Published February 2009, it has remained in the top 50 for book sales ever since.  That is saying a lot for a debut novel!  According to Audrey's books in Edmonton, Alberta, the paperback edition should be available in February 2011.  But that may have changed yet again as I've heard rumour that it may be April 2011.  Such success intrigues more readers to see what all the publicity is about!

The Help entices you, introducing you to some genuine dynamic characters. Through the turbulent 1960's, spanning a period of two years,  one becomes acquainted with segregation, the lines drawn within the community, the abuses that a blind eye is turned to.  Not all "the help" fare badly, though, and The Help makes known the loving relationships that developed between "the help" and the families they cared for and served.


This is the story of three women, Eugenia (known as Skeeter throughout the novel), an Ole Miss graduate and writer; Aibileen, maid and caregiver in the Leefolt household; and Minny, maid to the Foote household.  Their lives become dangerously entwined when they embark together on an endeavour that will shed light upon good and bad, employer and employee, and make the world take notice.


Kathryn Stockett gives voice to those who were seldom heard.  She has been criticized for assuming to write from the perspective of those known as "the help".  I think criticisms have been too harsh in that respect.  The author grew up in Jackson Mississippi, her family had a maid, Demetrie, whom her family loved.  She is intimately aware of the racial tensions of the time and sought to share this which is a topic close to her heart.  She may have taken literary license in doing so, but her goal was achieved.  More of us are aware.  Hopefully none who read this novel will come away unchanged.  "Wasn't that the point of the book? For women to realize, We are just two people. Not that much separates us. Not nearly as much as I'd thought." (quote from The Help).  I know these characters will be with me for a while and the  lessons learned from this book will last forever.

The only criticism I have is the use of profanity (the use of the Lord's name in vain is common throughout the book) and the scene with the intruder on Celia's property. I don't want to give anything away, but the sensitive reader must be aware. The Help is a proverbial eye-opener complete with true to life antagonists and protagonists.  It took me a while to really get into this novel due to other commitments upon my time, but once I did I could hardly put it down.


Rated 4/5 (I would rate it a full 5 were it not for the language and rather graphic scene with the stranger in the garden which detracted from the overall satisfaction I had in reading this novel.)


Some of my favourite quotes from The Help:


"Everyone knows how we white people feel, the glorified Mammy figure who dedicates her whole life to a white family. Margaret Mitchell covered that. But no one ever asked Mammy how she felt about it."


"All my life I'd been told what to believe about politics, coloreds, being a girl. But with Constantine's thumb pressed in my hand, I realized I actually had a choice in what I could believe."


"It seems like at some point you'd run out of awful."


"There is no trickier subject for a writer from the South than that of affection between a black person and a white one in the unequal world of segregation. For the dishonesty upon which a society is founded makes every emotion suspect, makes it impossible to know whether what flowed between two people was honest feeling or pity or pragmatism." (Howell Raines's Pulitzer Prize winning article "Grady's Gift")-Kathryn Stockett admired this quote and used it in her summary Too Little, Too Late.
Posted by Shirley at 12:18 AM

Email ThisBlogThis!Share to TwitterShare to FacebookShare to Pinterest
Labels: Kathryn Stockett, The Help